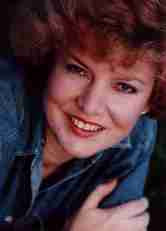 "...how can I--a woman who has been called by God to love and obey him first and foremost--how can I write anything less than a story that illustrates his love for mankind? Or that illustrates the reality of what happens to a life that rejects him?"--Angela Hunt

But is Christian fiction in danger of getting watered down to the point where no clear Christian message is discernible? Not as long as there are writers like Angela Hunt and BJ Hoff. BJ has often blogged about this topic, and Angela Hunt does so in this post, "How explicit is your world view?" Great stuff.

Don't get me wrong...I don't believe Christian fiction has to whomp the reader upside the head with the gospel message. The best Christian fiction writers reflect Christ in their writings with subtlety and grace, but the message is clear.

Some of my favorite Christian authors have been nominated for the Christy Award. You'll recognize the names of Lisa Samson and Liz Curtis Higgs from this blog. The Christy Awards are "named in honor of Catherine Marshall’s novel and of her contribution to growth of the fiction Christians love to read."

By the way, I recently re-read "Christy" after many years. I believe I was a teen-ager the last time I read it. And it was just as fresh and wonderful, many years later. If you've never read it, I highly recommend it.

--A suburban Chicago substitute teacher showed "Brokeback Mountain" to her class of eighth-graders. The Chicago Board of Education is being sued by the guardian of one of the students. My question: WHAT WAS THAT TEACHER THINKING!?!?! Sheesh!

--Did you have a nice Mother's Day? I did. But Darren Marlar and I were both scratching our heads when a listener called in to let us know that her daughter, who lives out of town, TEXT-MESSAGED "Happy Mommy's Day" to her yesterday. That was it. The mom had the grace to laugh about it, but she pointed out, "Hey, she had the phone in her hand, but didn't take the time to call." Yep...she text-messaged.

--At least Melodee's little daughter had a heartfelt comment for her mom yesterday:

”Mom, I wish you were a fishstick because then I could eat you!”