How I Got Ripped Off When it Comes to My Fingernails (Literally!)

A cautionary tale about fake fingernails

About a year ago, I made the decision to stop picking the nail polish off my fingernails.  I held to that decision for several months, and I loved the results.  My fingernails became strong, and with fairly regular professional manicures and polish changes, the looked pretty good.

I blogged about it in this post, Winning the Battle with My Weak Nails.

Here they are at the height of their healthiness: 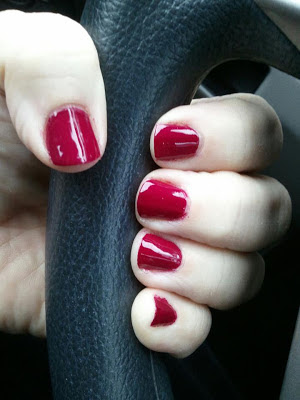 As happens with many addictions, I fell off the wagon and my nails became weak again.  I managed to keep them from total collapse, but...

A couple of months ago I was invited to help em-cee a bridal fashion show.  Included would be borrowing a dress from David's Bridal and getting my hair styled for free.

I wanted my nails to look great.  So I decided to take the plunge into gel nails.

Or should I say, I THOUGHT they were gel nails.

I went to the nail place I had been frequenting, even though I found their work less than excellent and their attitudes bordering on unfriendly.

I asked for gel nails.

This is the result: 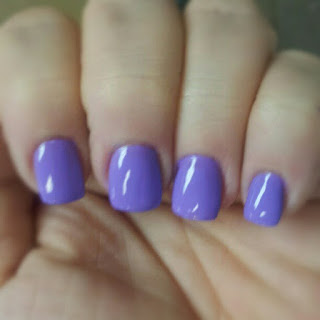 Looks great, right? And I was very pleased.

But appearances can be deceiving.  Turns out, these weren't gel nails at all, even though I specifically asked for gel nails.  I found out later that if a nail tech uses a mix of powder and liquid on your nails, they are acrylic, NOT gel.  If they're putting gel nails on you, they will actually be using GEL.

How can they get by with such deception?  You got me.  But I talked to one reputable nail tech who said before her nail tech days, she spent a year getting what she thought were gel nails, but were NOT...and it pretty much destroyed her nails.

Getting rid of them...

As you'll know if you're a veteran of nail stuff, growing out these nails isn't pretty.  You have to come back on a regular basis and get them re-done, or they grow out looking odd...with a noticeable hump where your real nails end and the fake ones begin.

I didn't want to go back to the same place to pay to have them removed. But I wanted them OFF.

My own hairstylist, who also does nails, tried to get them off for me...but the usual process wasn't very successful.  They were not going away without a fight.  She managed to take a layer or two off.

I finally ended up popping them off, but along with the fake nails came my real ones.  What was left was a ridged, scarred (from having them sanded down by a machine), ugly mess.

Feast your eyes on what my nails look like now: 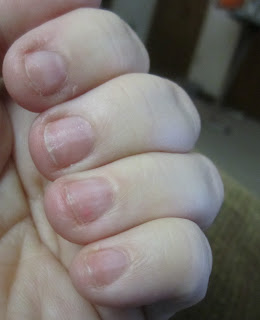 I'm trying to pamper them to get them to grow back into a somewhat healthy state.

If you are a nail-knowledgeable person and have any advice, please share!

Also if you have any nail horror stories of your own, please share!

I'll keep you posted on the ongoing saga of my fingernails.
Posted by Cindy Swanson at 8:21 AM No comments: