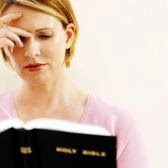 A poll by the Barna Research Group indicates that Americans are distancing themselves from traditional biblical beliefs.

Many of the nation’s core religious behaviors have changed little over the last decade. However, one area that is undergoing change seems to be what Americans believe - as adults in this country distance themselves from traditional biblical perspectives.

According to the poll:

Most Americans still embrace a traditional view of God, but they are less likely than ever to do so. Currently two-thirds of Americans believe that God is best described as the all-powerful, all-knowing perfect creator of the universe who rules the world today (66%). However, this proportion is lower than it was a year ago (71%) and represents the lowest percentage in more than twenty years of similar surveys.

The poll also found that fewer Americans believe that Jesus was sinless, and 10 per cent fewer of them believe you should share your faith.

Any thoughts?
Posted by Cindy Swanson at 7:53 AM