An open letter to NBC's "The Biggest Loser" 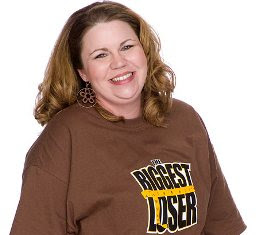 Dear producers of "The Biggest Loser":

Find some way to get rid of Vicky. ASAP.

As you know if you frequent this blog at all, I'm a big fan of "The Biggest Loser"... I think I've watched three or four seasons of the show. I love watching these people who start out very obese and unhealthy morph before my very eyes into slim, fit people. I've always loved make-overs of any kind, and "The Biggest Loser" is one major make-over!

However, I have to say that I have NEVER been as irritated, annoyed and repulsed by a reality show participant as I am by Vicky in particular, and her three-person "alliance" in general.

During the entire season so far, Vicky has come across as doing just enough to keep herself on the show, and no more. Due to the fact that she has severe knee problems, she often lets her husband Brady carry their team in her stead.

Unlike the other contestants--who live for communication from home like a thirsty person in a desert--she never seems interested in winning a challenge when the prize is a phone call or other communication with her children. Such was the case last night, when she dismissed the challenge reward of a video from home as "lame."

And she pretty much came right out and said last night that her primary goal in the competition was to win the money. I guess the weight loss is just a side benefit?

Her machinations with Brady and their friend Heba really became obvious last night, and throughout, Vicky literally smirked, knowing who was going to be thrown under the bus and knowing she was safe from elimination.

I talked about it on the air this morning, and a listener named Traci e-mailed me with my thoughts exactly:

"...I loved Amy P [the one who was eliminated] and was hoping that she would pull off the biggest loser of the week so she wouldn't go home. I think that Vicky, Brady and Heba threw the weigh-in so that they could get rid of Amy and stick it to Phil. That smug look on Vicky's face just makes me sick. I think that she has lost sight of what brought her there in the first place and has become wrapped up in the game. I know from previous seasons that those who choose to be vindictive do not prevail... I still believe that the people who work hard and keep their hearts right will prevail in the end, I just want that alliance separated or dissolved so that each one has to stand on their own merit."

I couldn't agree more, Traci! If it comes down to any one of those three people--Vicky, Brady, or Heba--and a major change has not occurred in their attitudes, it might be enough to make me avoid the show altogether.

I hate it when people do that on those shows. It seems like they get rewarded and last as long as possible because of the drama they bring.

Thank you for stopping by today and for your kind words. I found your profile very interesting - voice-over and a radio announcer - what fun that must be.

Yet, it is people like these that draw others to watch. Maybe it is evil vs. good; mean vs. nice; the gift of stupid vs. the gift of wisdom or faith.

I get too infuriated for the lack of caring and stop watching. Now, I just have to watch myself to make sure I am flowing in God's way.

Watching television would be easier. :)

Ah, well - comeuppance is a great word. And I'm sure she'll get hers.

I am with you on this one. Gordon told me about this article so I thought I would check it out. I wish we could send Vicky, Brady, and Heba on a slow boat to China. :)