Katrina: One year later, a Mississippi church continues to rebuild 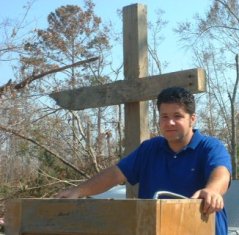 "The one thing that has sustained us through this is a strong reliance on God's sovereignty and His control over all things....The ultimate, over-arching purpose is that He be glorified, and we're starting to see those thousands of purposes that are underneath that canopy...I'm saying from first hand, if I didn't have the assurance that God was in control of this, I could not have made it."--Don Elbourne, pastor of Lakeshore Baptist Church in Lakeshore, Mississippi

Don Elbourne posted this on his blog on August 31st of last year: "I am alive. My wife and two kids are alive. My family survived Hurricane Katrina. Still numb from the devastation around us, I can’t help but praise God for the safety of my family and the assurance that God’s providence works all things together for our good and his glory."

That was only the beginning.

It's been almost a year since Hurricane Katrina slammed the Gulf Coast. Lakeshore, Mississippi, bore the brunt of her fury. Don Elbourne has pastored the church, situated between New Orleans and Biloxi, Mississippi, for 12 years.

I was able to interview Don this morning. He spoke on his cell phone as he watched people line up to receive food at the church's food distribution center, still going strong and serving some 500 people a day.

Don and his family, whose actual home was in New Orleans, had headed to his parents' home in Baton Rouge in advance of the storm. When he was finally able to get back to Lakeshore, he was heartsick at what he saw. There was literally nothing left of what had been three small buildings built in the early 1950's.

Don describes his first visit back the church in this (2 min 14 sec) soundbite:


After the first overwhelming days, church members had to decide what to do next. Their first order of business? Days after the storm, they set up folding chairs on the church property and, well, had church.

A year later, Don looks back on a steady stream of church groups who have come to Lakeshore to help clean up and rebuild, calling it "overwhelming in the best possible way."

The church is still meeting in temporary buildings, having made a decision to hold off on re-building its own facility until church members had places to live. Says Don, "We've learned a very important lesson that we've always given lip service to before, that 'the church is not the building.'"

Everyone lost their homes, and Don says it's going to take years to rebuild. Many people still live in cramped FEMA campers. Workers are building houses from the ground up; some 50 have been built so far. Crews are still welcome, especially skilled plumbers, electricians and the like. "The job is far, far from over, and we still need all the help we can get," says Don.

What has God taught Pastor Don Elbourne and the people of Lakeshore Baptist Church through Hurricane Katrina? Don's reply: that God is sovereign, and that His purposes will be fulfilled through the storm and its after-effects. Without that conviction and assurance, Don says he would not have made it.

Don describes what God has taught him through the storm in this (1 min 17 sec) soundclip:


If you'd like to help Lakeshore Baptist Church, the best way is to give them a call at (228) 469-0110. If you can't personally help with rebuilding efforts or financial needs, prayer is greatly appreciated.

(Pictures are courtesy of Don Elbourne's website, Locusts and Wild Honey, where you can find the entire story of what has happened in the past year, and what continues to happen for Don and for Lakeshore Baptist Church.)
Posted by Cindy Swanson at 9:46 AM