Some Gorgeous Heads of Hair

Cheating a bit, because this is from the archives of my blog. First posted September 6, 2011 as part of a bloghop called "Semi-Wordless Wednesday.--CS

Check out these luxuriant manes! 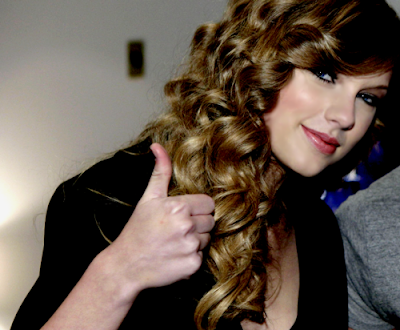 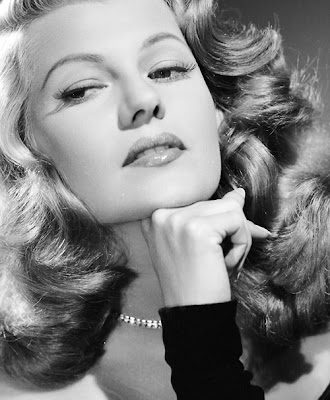 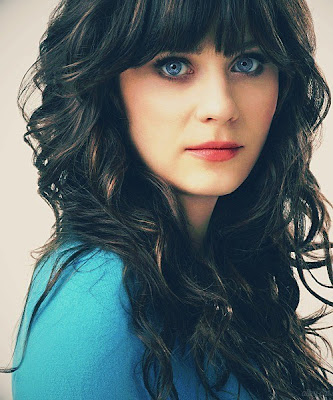 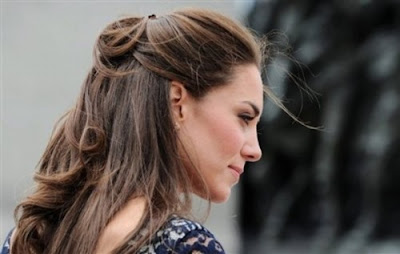 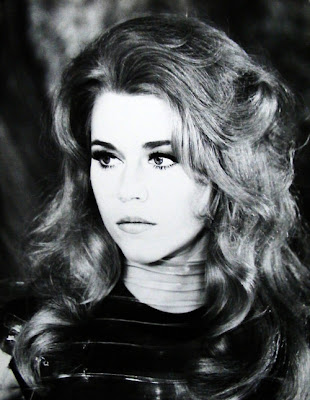 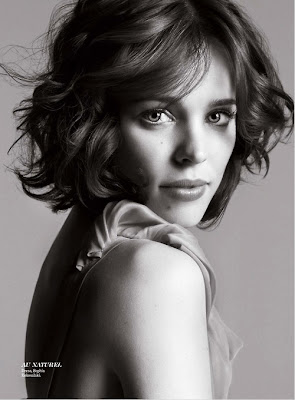 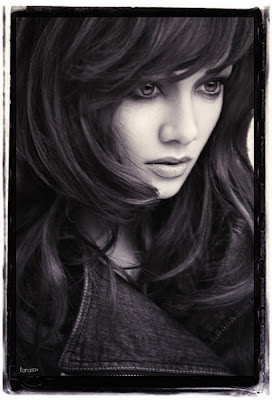 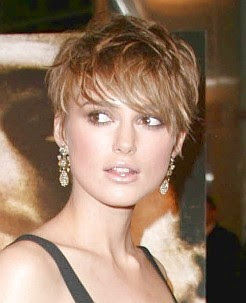 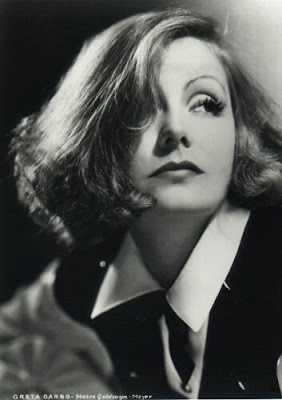 Do you have a favorite???
Posted by Cindy Swanson at 8:51 AM No comments:

What I'm Doing With That China 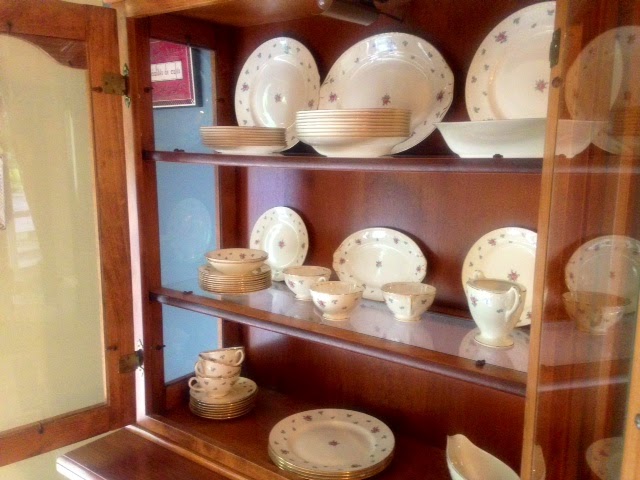 In my last post, I talked about a set of china I inherited recently.  It had been my maternal grandmother's, then my mother's, but I never remember anyone using it.

I finally unpacked it the other day and saw that it's really beautiful.  It's a vintage set of Homer Laughlin American Vogue eggshell china in the Rambler Rose pattern.  It's not a complete set, but except for a few pieces, it's unchipped and in beautiful shape.

I posed the question of what I should do with it, and got some great answers:

From my cousin Joni: "Cindy, that china is absolutely breathtaking!! I think in this crazy, uncertain world we live in that you should USE IT on a daily basis."

From my cousin Kathy: "I agree- use it for every day - at this point in life every day is a special occasion!!! Enjoy!!"

From Kay:  "I'd use it. And if you want to keep a piece then put one plate or platter on the wall. Use the rest. It's beautiful!"

So I'm both using it and displaying it!

I cleared the odds and ends out of my little hutch and put the china in it.  I think it looks beautiful 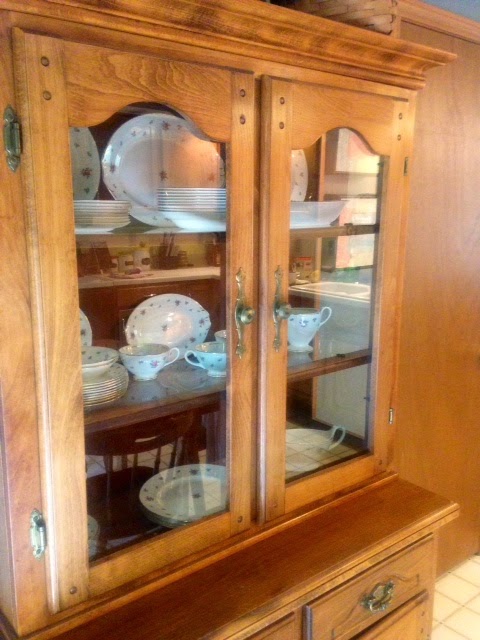 I'm not using all of it everyday, but I've taken to having my morning English muffins on one of the lovely dessert plates.

And since there are only six dinner plates, I'm thinking of getting another couple of plates on E-bay.  I will definitely use it for company, special occasions, and any other time I want to.

It's too pretty not to enjoy on a regular basis.

I did find out that vintage china (this set was probably made around 1950) should not be put in the dishwasher or microwave.

Does anybody have any other advice for me about vintage china?  I'd appreciate any feedback! 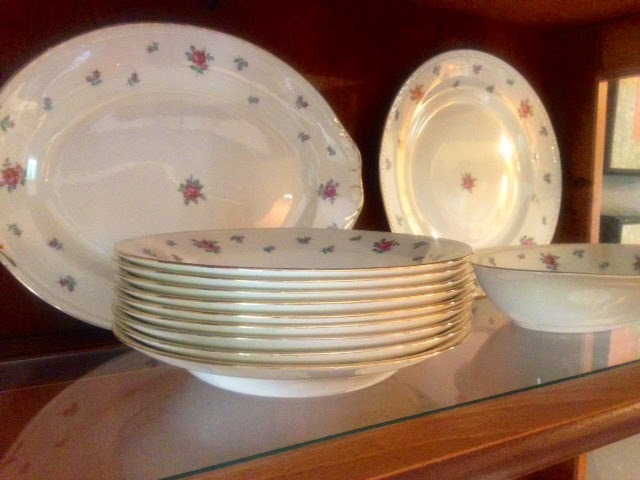 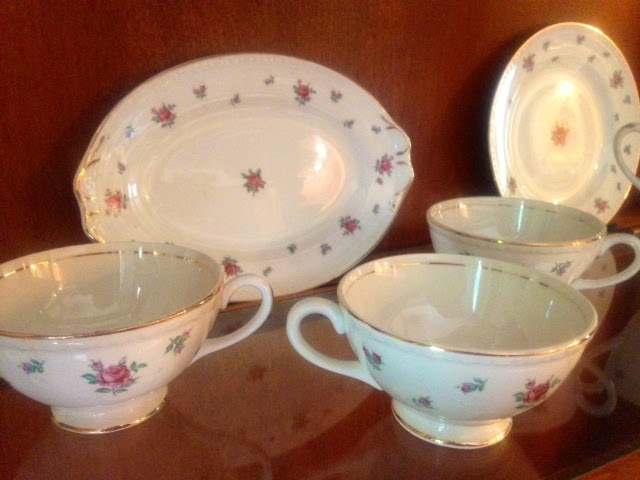 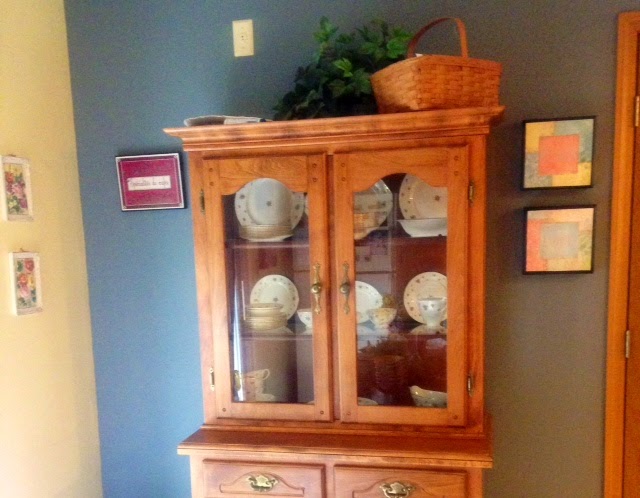 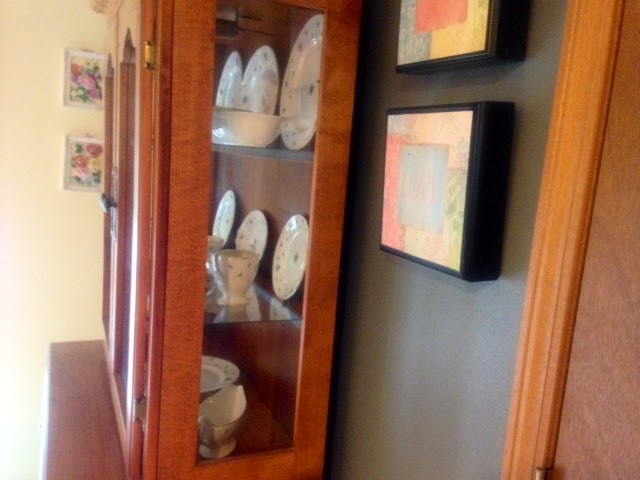 P.S.  The little hutch also belonged to my grandmother.  It's not antique, but I think it's pretty.

I've been thinking about painting it teal or white.  But I also think it's really pretty just as it is.  I'd love more feedback on this too! Thanks!
Posted by Cindy Swanson at 10:31 AM 2 comments:

What would you do with this china?

So, I've finally unpacked the china that originally belonged to my maternal grandmother. 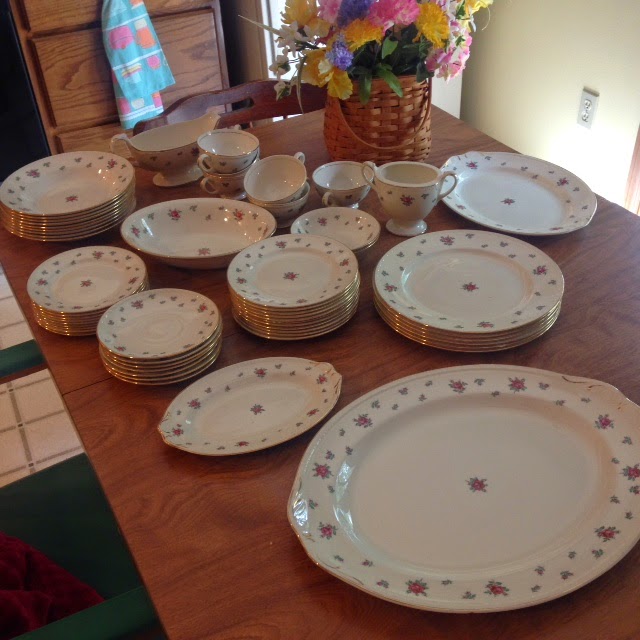 This is what remains of the set of Homer Laughlin American Vogue Rambler Rose china.

The set originally belonged to my grandmother and was passed down to my mother.  My mom wanted me to have it, but for one reason or another, I never claimed it until after my mom's untimely death last November.

And just today, I unpacked it. 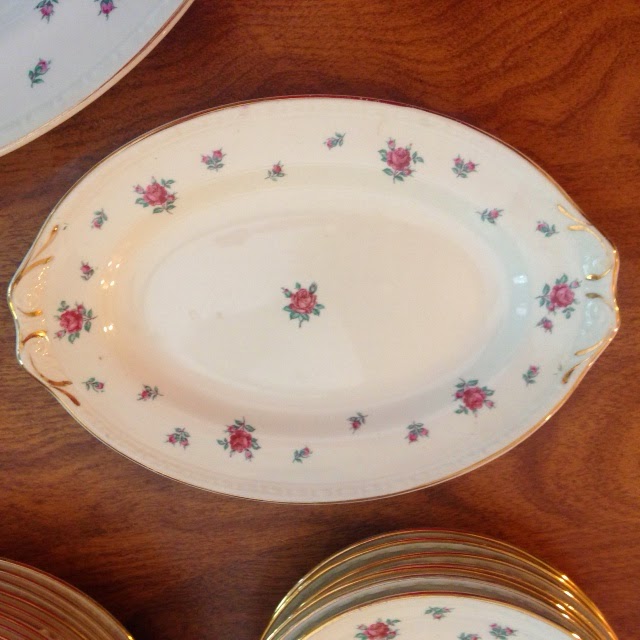 There are only six dinner plates, and two of the five remaining teacups are chipped or cracked. Otherwise, everything is in remarkably good shape.

I'm just not sure what to do with this lovely china.

Should I actually use it?  Should I just display it? (I do have a hutch currently filled with odds and ends of other dinnerware.)

Should I attempt to sell it?  Since my mom never used it that I can remember, it doesn't have a great deal of sentimental value attached.  But I'd rather keep it that not. However, I do see on the internet that there's a market for Homer Laughlin patterns. 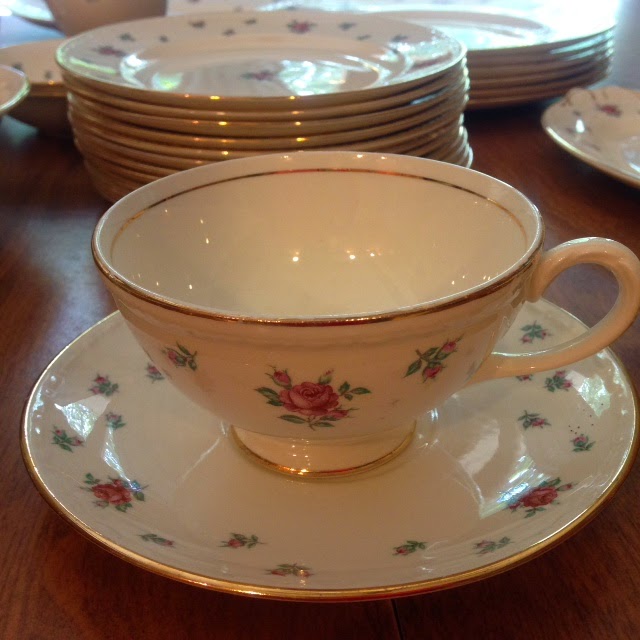 I Give Weird Nicknames (from the archives)

Okay, so I'm experiencing a MAJOR blogging drought.  But I've been blogging for over 10 years, so there's quite a bit of material locked away in that archival vault, right? And some of you may be new to my blog and never read some of this material.  So I'll be digging deep into that vault for the next few days...weeks?...and really hope you enjoy some of the old stuff.

The following was first published in June of 2004


It's a compulsion. I can't seem to let people who are close to me just have their given name...I have to give them a nickname, and often it gets completely out of control.

For example, take my daughter Elizabeth. It started with me calling her "Lizzy Boo." Then, for some reason, it progressed to "Lizzy Boo, the Tiny Roo." Not content with that, I had to shorten it to just "Roo"...which then morphed into "Roony Toon." From there it became "Roony Toons Adventures" (yes, I know it's weird!!!), then "Roony Toons Adventures in Odyssey," then just "Odyssey." Oh, the Odyssey of a nickname! Nowadays, I will often say something like, "Roo, will you answer the phone?" or something to that effect, so I guess it's calming down. Although for a while I was calling her "Roo Paul," and she just put her foot down on that one. You have to draw the line somewhere!

My husband Doug was first "Dougie-Wuggie" while we were dating (please don't get nauseous...I know it's syrupy!) Then I shortened it to Wugs or Wuggles. Sometimes I even call him "Wuggles the Clown." He totally answers to Wugs, though, because I've called him that for years.

Sometimes, the nicknames stick. When were were very young children, I started calling my sister Lisa "Lido." I have no idea why...but now that's what I call her, more often than not. We both attended the same Bible college, and as others would hear me calling her "Lido," they picked up on it too. Soon, complete strangers were calling her "Lido"--which she wasn't crazy about. "Lido" was a pet name that should have been reserved for close friends and family!

Then there was my good friend and former co-worker, Joel Griffith. (Joel is now a staff writer at Slavic Gospel Association.) I found myself calling him "Joel," with the emphasis on the second syllable. That reminded me of a girl I went to high school with, whose name was Joelle Palermo. So I started calling him "Joelle Palermo," and that got shortened to "Palermo." Soon, just about everyone who worked at the radio station at the time was calling him "Palermo," and I even still call him that to this day...and he answers to i

Now, my co-worker Charmel is often called "Charmie"---thanks, of course, to me. It's caught on to the point that people even call her that on the air sometimes. (Actually, it started as "Charmie-Pooh." Yep. Really.)

Even the dog is not exempt. Our German Shepherd's name is Stormy, but for some reason I morphed that into "Stormcloud Trooper," and now, more often than not, I will just call her "Trooper." Smart dog that she is, she answers to either one!

Interestingly enough, given I'm the great bestower of nicknames, I don't really have one myself. Unless you count the fact that my real name is Cynthia and I'm almost never called that. Although, my dad used to occasionally called me "Cindoza," and my brother-in-law Steve called me "Cindinka." Come to think of it, my brother David has called me that too, and even "Dinkers" for short.

This weird nick-naming thing must be genetic. Apparently, Grandpa Garrett was a great giver of nicknames. And my sister Lido and I found out something really strange recently. One of the nicknames I had given Elizabeth at times was "Creekie May." (Don't ask...I have no idea why.) Come to find out, completely ignorant of that strange nickname, my sister sometimes called HER daughter "Creekie La Luna"!!!

I often call my sister Bev "Buv" because of the way a friend of hers used to pronounce it. And don't even get me started on all the strange nicknames I gave my brother when he was a kid. The one that has stuck through all the years is "Dave-o," which is useful to help distinguish him from my sister's husband, who is also a David.

As I re-read this before posting, I am once again reminded that I am REALLY weird. (sigh.)
Posted by Cindy Swanson at 5:58 PM 1 comment: