An Unexpected Legacy from My Mom

When my mom passed away unexpectedly last November, the last thing my siblings and I were thinking about was "What things of Mom's do I want?"  Trying to deal with being gobsmacked by grief was pretty much our main focus.

But the time came when we had to make some decisions.  Would someone want this piece of furniture? What about pictures? Knick-knacks? Either someone took it or it would wind up at Goodwill.

I set aside a few knick-knacks and one piece of furniture that I had always loved.  When I was recently in Texas for my niece's wedding, we brought the stuff home.

Among the things I chose were three pieces of porcelain.  I had seen these in my mom's home for many years--she had inherited them from her beloved Uncle Bill and Aunt Cynthia, who I've talked about before on this blog.

But I must confess, I don't think I've ever picked them up and looked at them. When I chose them as my sister and I were clearing out my mom's house, my sister remarked, "I think those were pretty expensive."

Well, last night I got curious.  I turned the larger piece over, and found this stamped on the underside: 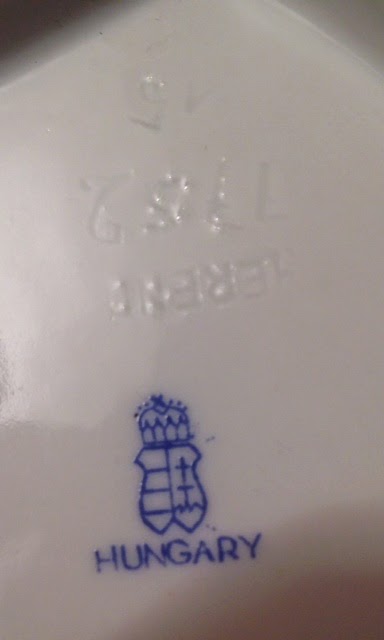 Turing the piece around, above the "Hungary" stamp I saw the word "Herend."

A Google search turned up this information:

Founded in 1826, it is based in the town of Herend near the city of Veszprém.
In the mid-19th century it was purveyor to the Habsburg Dynasty and aristocratic customers throughout Europe. Many of its classic patterns are still in production.

After the fall of Communism in Hungary the factory was privatised and is now 75% owned by its management and workers. As of 2006, the factory is profitable and exports to over 60 countries of the world. Its main markets are Italy, Japan, Russia and the US.


Some further investigating told me that the singular characteristics of the stamps on the bottom of all three pieces indicated they were made sometime between 1915 and 1939.  (The crown on the stamp was no longer used after the Communists took over the factory in 1948.)

So are they valuable?  I have no idea how much they would bring, moneywise.  I saw pieces on eBay that went for around 200 dollars. If they're truly rare, they might go for much higher.

But I'm not interested in selling them.  Their sentimental value is to me is, well, priceless.

They represent my Mom's beloved aunt and uncle, who adored and cherished her as if she was their own. They represent my beautiful mother...and every time I look at them, I'll have a warm feeling of closeness to her.

I value the beauty of the pieces...the fact that many years before I was born, an artisan lovingly hand-painted them.

I'll admit, though, that knowing they're truly valuable has caused me to appreciate them more, and I'm honored to have them in my home.
Posted by Cindy Swanson at 10:13 AM 1 comment:

A Lovely Spring Wedding in Texas

My niece Katie and her fiance Ryan were married in a beautiful outdoor wedding last Friday at the Taylor Mansion in Taylor, Texas.  The weather was perfect and it was simply a fairy-tale wedding.
Here are some pictures I took... 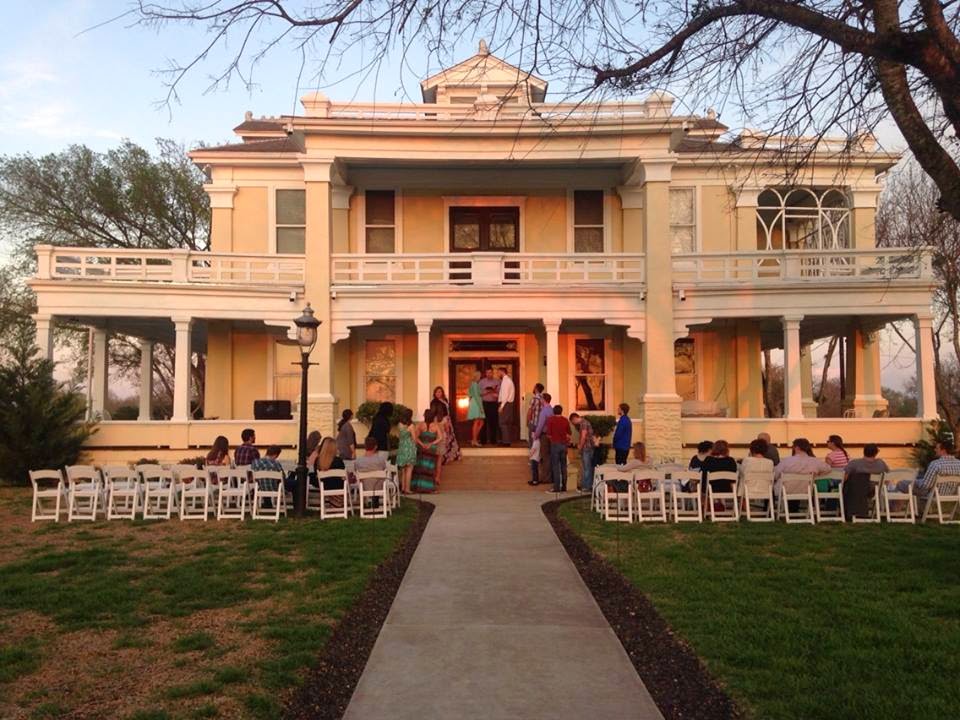 This was actually taken at the rehearsal.  The beautiful Victorian house, built in 1878, was ideal for an outdoor wedding. 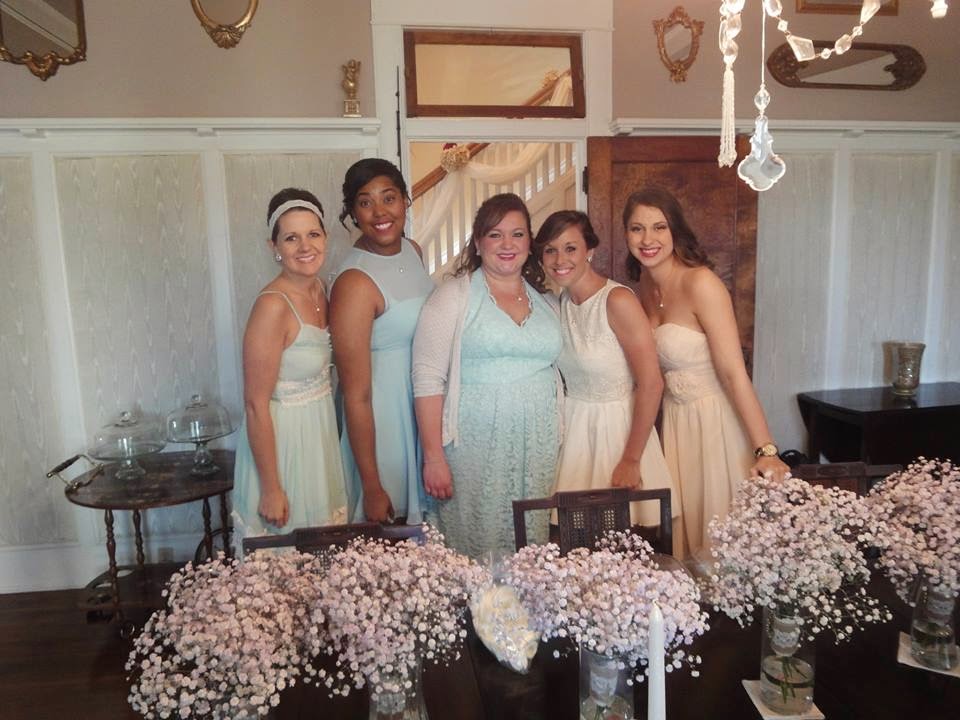 Bridesmaids wait for their moment inside the mansion, their lavender-tinted babies' breath bouquets waiting in vases of water. The mismatched mint green and beige dresses ended up harmonizing beautifully! 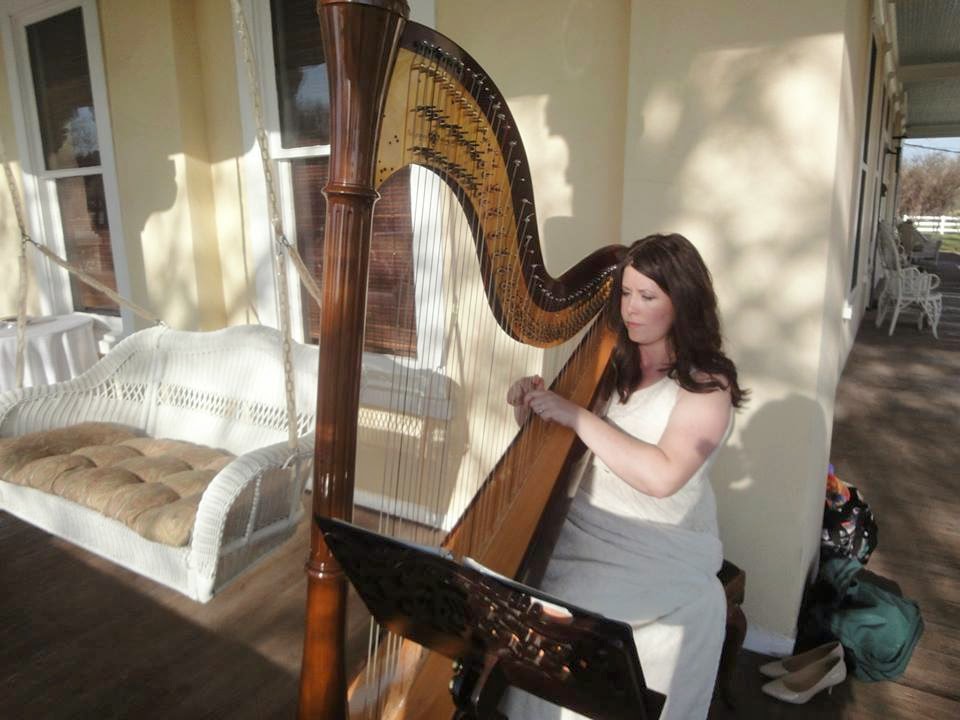 My beautiful daughter-in-law Daylyn is a talented harpist.  Here she's playing the harp before the ceremony. 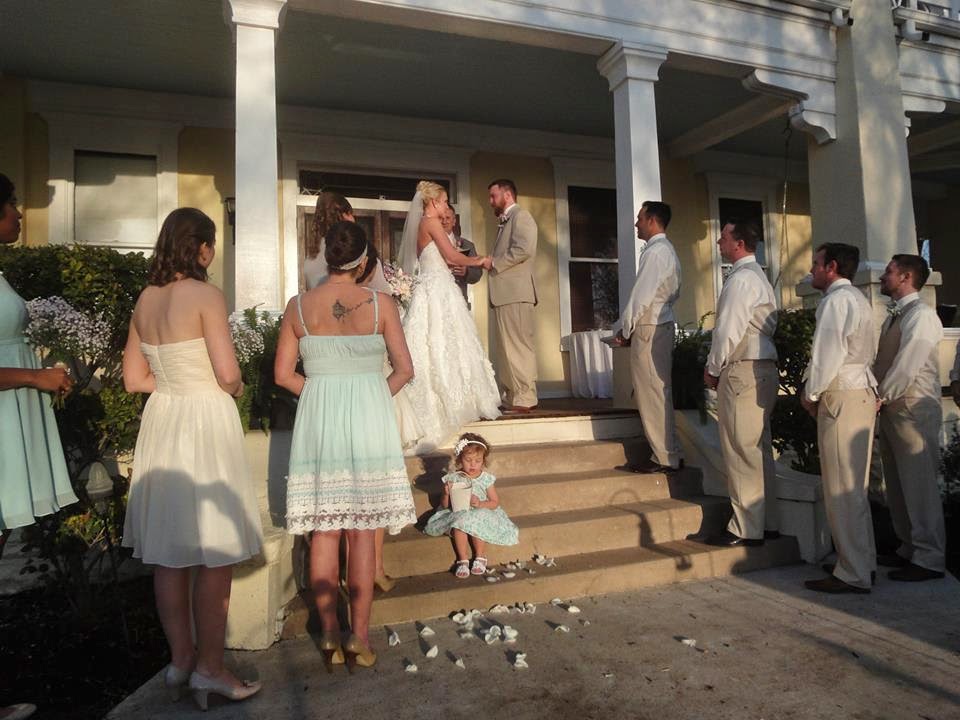 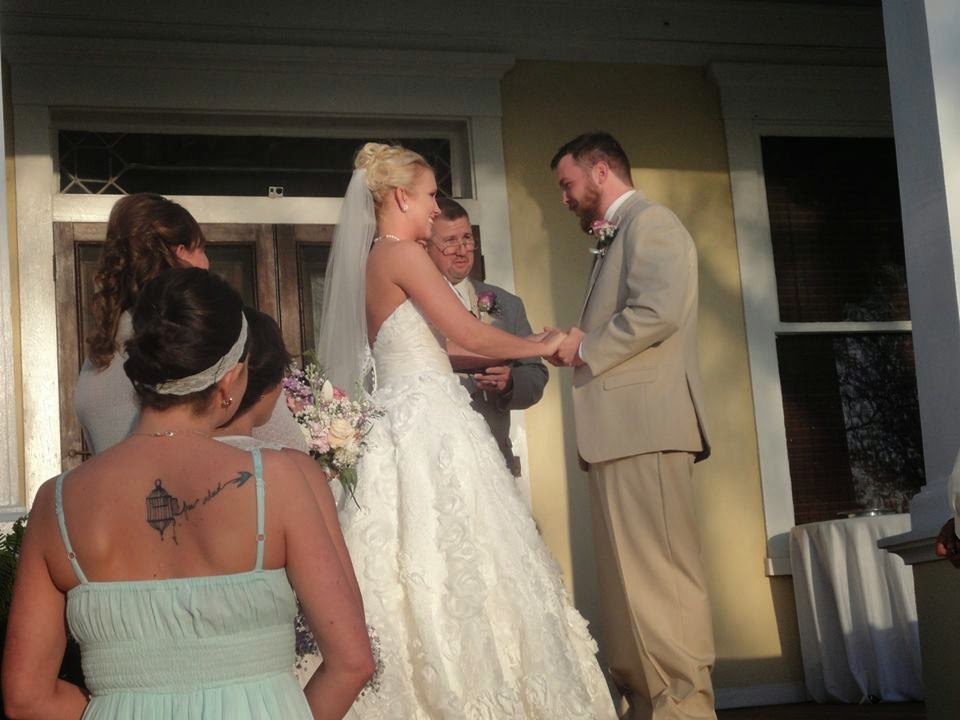 Katie's father, my brother-in-law David, is a pastor and officiated the vows. 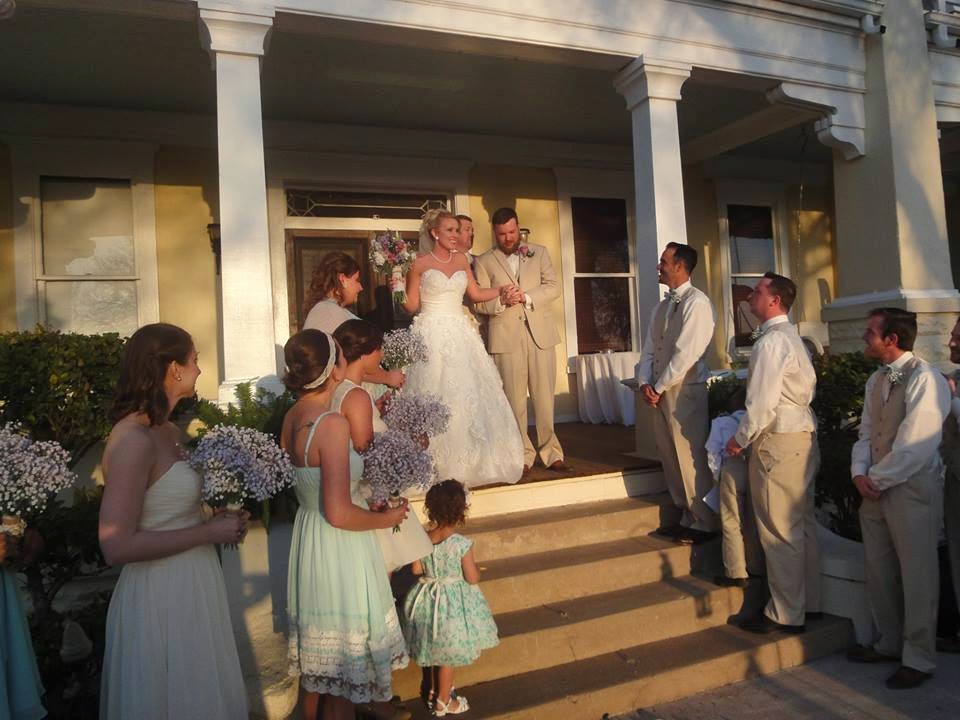 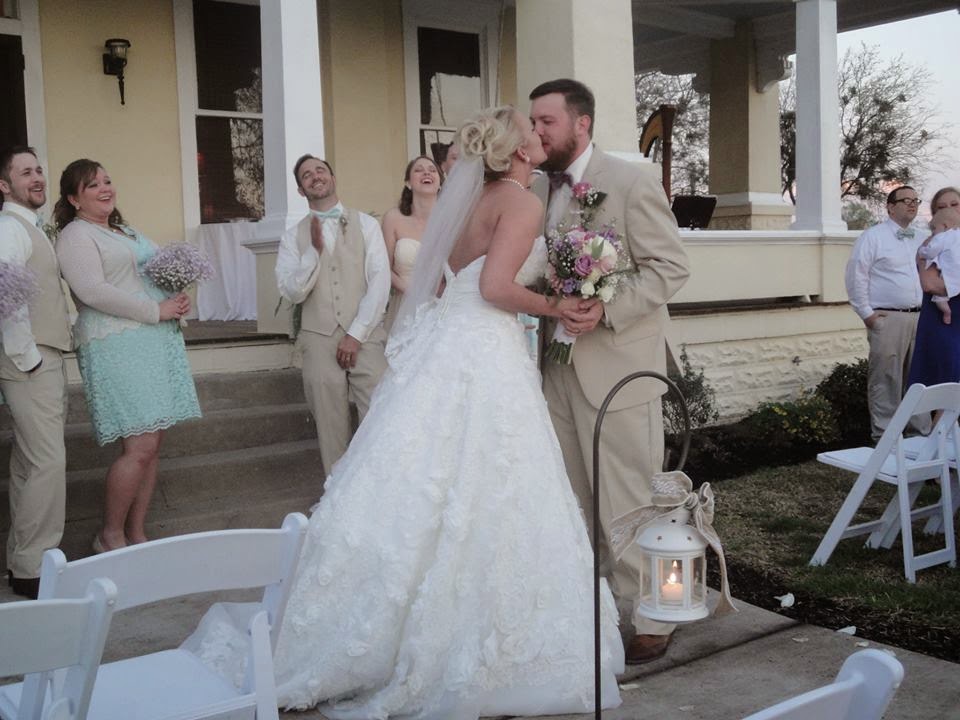 I snuck this photo while professional shots were being taken.  Don't worry, I stayed well out of the professional photographer's way! 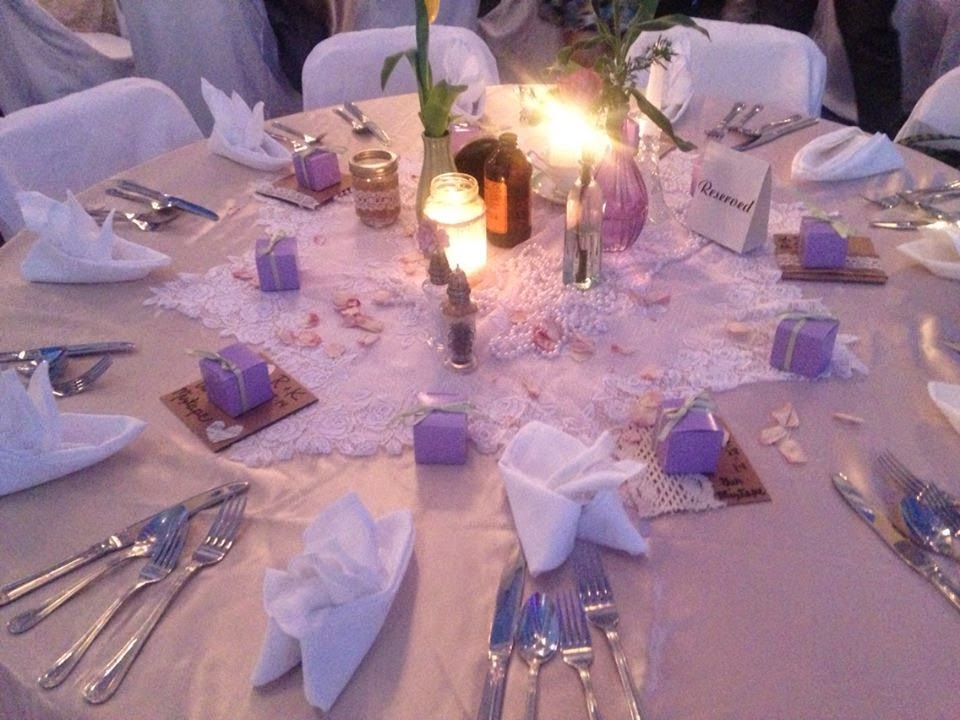 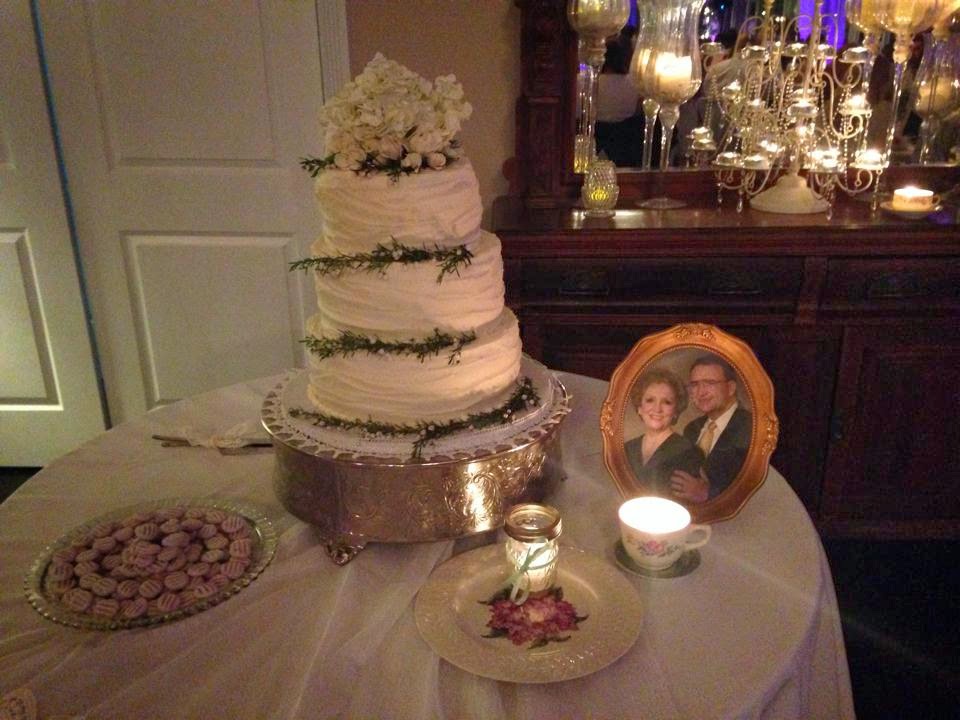 Since my parents, Katie's beloved grandparents, have passed away, they were honored by their photo placed by the cake.

All in all, it was a beautiful celebration at a gorgeous venue.  I'm so happy for my beautiful niece and her new husband! 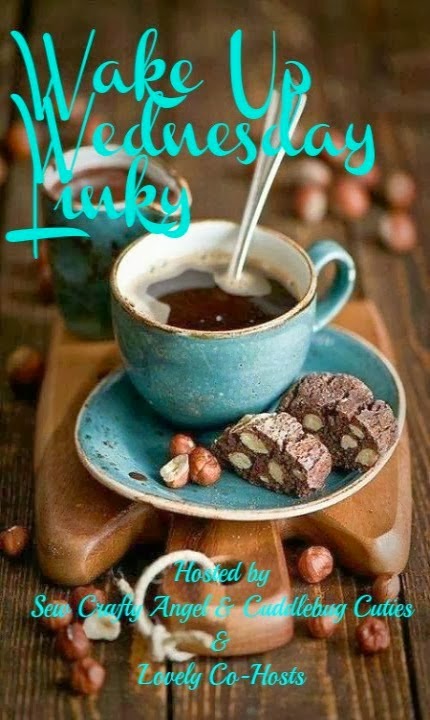 Posted by Cindy Swanson at 9:05 AM No comments: