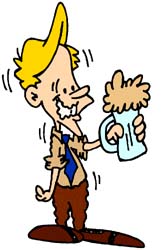 The Princeton Review has come out with its lists of colleges that are either the most "Stone Cold Sober" or the ones that have the biggest rep as party schools.

Topping the party-hearty list is the University of Texas at Austin; the Mormons' Brigham University is at the top of the sober list, followed by the evangelical Wheaton College. (I would imagine that famous Wheaton alumni, like Billy Graham and Elisabeth Elliot, would approve.)

Why does this matter?

Well, even if you personally have no problem with the imbibing of what Rush Limbaugh calls "adult beverages," there's no doubt that drinking is a HUGE problem on college campuses.

According to this article: "Despite the best efforts of college administrators, the pressure to drink is enormous. The results can be serious. According to the National Institute on Alcohol Abuse and Alcoholism, college drinking contributes to an estimated 1,400 student deaths (mostly automobile related), 500,000 injuries, and 70,000 cases of sexual assault each year. Male college drinkers may have 12 or more drinks on 20 percent of the occasions when they drink."

We've all heard of tragedies resulting from binge drinking, from alcohol poisoning to traffic fatalities to sexual assaults to hazing deaths.

If you talk to the students on the "stone cold sober" list, I doubt if you'll find they're a sad and boring bunch. The fact is, hard as it may be for some to fathom, it's completely possible to have a good time and enjoy yourself without drinking. Amazing concept, huh?

You can see the complete list of colleges here.

The joy of re-reading

Do you ever re-visit a book that you read years ago? I did that over the weekend.

I checked out Madeleine Brent's Tregaron's Daughter from the library, remembering little about it except that I had greatly enjoyed it years ago.

Upon re-reading, I realized that I remembered VERY little about the plot--so much so, that it was almost like reading a brand-new book. And it was terrific.

I think I've read all of Brent's books, and enjoyed every one of them. It came as a shock when I found out, not too long ago, that "Madeleine Brent" is actually a pseudonym for...a MAN! Yes, Brent was actually author Peter O'Donnell. Read more here.

I think I've mentioned in this blog that I read "Jane Eyre" probably at least once a year.

How about you? Do you ever re-read old favorites?