Will the real Mary Magdalene please stand up? 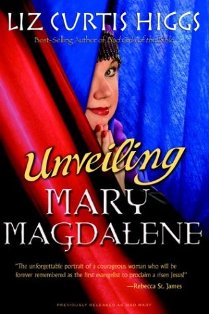 With the huge popularity of the book, The Da Vinci Code by Dan Brown, and now the imminent release of the movie based on the book, I think it's important to examine the real Mary Magdalene.

Two Christian books--one recently released, one from a few years back--are well worth reading to discover the truth about this much-maligned and misunderstood woman.

I recently read and reviewed Angela Hunt's Magdalene. You can read my review here and listen to it here.

Though fictional, Angela's book reflects what we actually know about the historical Mary Magdalene.

The second book is Unveiling Mary Magdalene by one of my very favorite authors, Liz Curtis Higgs.

I just got off the phone with Liz...I was interviewing her about her recent novel, Grace in Thine Eyes. But I couldn't resist asking her, as someone who has done a great deal of research on Mary Magdalene, what she thinks of DaVinci Code-type fallacies that have arisen about the woman...such as the "fact" that she and Jesus were romantically involved with each other.

"Mary Magdalene has suffered from two thousand years of bad press," Liz tells me, "and for several reasons. First of all she's from Magdala, which was a bad town...the town known for fabric, feathers, fish and fallen women. And so when you have a woman with a history like Mary's...seven demons...and make her from a town like Magdala...well, sometimes a town can taint a reputation!"

Another point of confusion about Mary, says Liz, is the multiplicity of Marys in the Bible. "The Mary stories sometimes get confused. You throw in the sinful woman who anointed Jesus feet with her tears; she has no name, but people who often confuse her with Mary of Bethany, who also anoints Jesus' feet.

"...Even in The Passion of the Christ we saw Mary [incorrectly] as the woman taken in adultery who was about to be stoned."

As for what Higgs calls "the DaVinci Code problem"--suggesting that Mary and Jesus had, in Higg's words, "a thing going on"--Liz says, "I'll give you one place of scripture to look to absolutely discount that, and that is when Mary, in John 20, is outside of the tomb, and Jesus speaks her name. She turns around and says, 'Rabboni,' which means 'my great teacher.' That pivotal moment establishes what the relationship was."

Higgs also stresses that the Bible never even hints that Mary Magdalene was a prostitute, a misunderstanding that Higgs believes goes back to the "too many Marys" confusion.

If you'd like to know more about the fallacies of The Da Vinci Code, go to Liz's website and click on DeCoding DaVinci, where Higgs compares the controversial book with what the Bible says.

"I'm on a mission," says Liz. "I wrote that book [Unveiling Mary Magdalene]in 2001, long before DaVinci ever came out...and you know, I've always been such Mary fan, I hate to see her so dissed."

Look for a transcript of my interview with Liz about Grace In Thine Eyes sometime soon.
Posted by Cindy Swanson at 8:41 AM