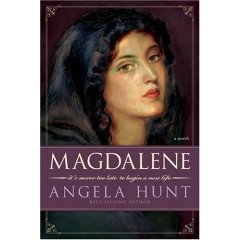 Go here to listen to my review of Angela Hunt's Magdalene.

UPDATE: I'm now experiencing problems accessing this sound file on my computer. If you were able to successfully listen to it, PLEASE let me know!

Here is the written version:

They say some of the best works of fiction are spun around the question, "What if...?"

In "Magdalene," Angela Hunt takes this question and crafts a riveting tale of revenge and redemption with Mary Magdalene--or Miryam of Magdala--as the central character.

"What if" Miryam is a Jewish wife, mother and tradeswoman until she loses everything in a horrific tragedy? "What if" Roman soldiers brought on that tragedy in retaliation for a zealous act on the part of Miryam's firstborn son? "What if" Miryam's characterization as a woman of ill repute is thrust on her by circumstances beyond her control? "What if" her thirst for revenge continues to drive her, even after a meeting with Yeshua (Jesus) miraculously changes her life? And "What if" the very Roman soldier she blames for her loss carries with him a powerful link to Miryam's past?

While weaving a fictional story from these questions, Angela Hunt is careful to honor the Biblical record of this remarkable woman and the actual things we know about her--such as the fact that Jesus delivered her from seven demons. This is especially important when so many wild speculations about Mary are being presented as fact, including the falsehoods put forth in the popular book The Da Vinci Code.

Miryam is fleshed out as a very real woman--headstrong and independent, big-hearted and loving; but riddled with pain, grief, and a relentless craving for justice and revenge. We see how her life is changed irrevocably by her following of Yeshua, the wise and compassionate teacher who claims to be nothing less than the Son of God.

It's wonderful to see familiar Bible events come alive through Mary's eyes. Hunt makes Yeshua a real person, portraying his humanity without diminishing his deity in the least.

The parallel story of Atticus, the Roman soldier whose secret links him inextricably to Miryam, is equally compelling. It sheds a great deal of light on what it was like not only for Jews to be under Roman oppression, but for a Roman soldier to be stationed in Israel.

Angela Hunt's writing has never been more beautiful and evocative, redolent with the sights and sounds of first-century Palestine and vivid with well-researched historical accuracy.

The result? A finely-crafted fictional tale of "What if...?" that ultimately leads us to a very true and timely look at redemption and forgiveness.

I received this e-mail from a personal hero of mine, evangelist and Marine Tim Lee:

"Thirty-five years ago yesterday, at 1:30 in the afternoon, I stepped on a land mine that ripped both of my legs from my body. I am convinced that God spared my life. If I would have stepped on the mine in just the right way it would have blown my body to thousands of pieces. The mine was large enough to have destroyed a Jeep.

"So what does a person do to 'celebrate' such an anniversary? I went to Walter Reed Hospital in Washington D.C. to visit our soldiers and Marines who have been injured in Iraq and Afghanistan.

"Several months ago S/Sgt. Joe Bowser who had been hit in Iraq and had his right leg blown off called me and asked if I could come and visit him and others at Walter Reed. I was unable to change my schedule to go any earlier, however, since I was in a crusade this past week in Annandale, Virginia it worked out perfect for us to go yesterday.

"Lieutenant Colonel Elizabeth Berbano is a member of Capital Baptist Church, where I was speaking. She and her husband are both Army Doctors. Her husband is in Iraq right now.She went to work and set it up for me to be able to visit and to spend some time with our soldiers and Marines who have given so much for this country.

"Marine Chief Warrant Officer Charles Andrews was our liaison person at the hospital and a tremendous help.

"First, we went to visit the soldiers that were in physical therapy. There were approximately 15-20 who were in therapy and most of them, if not all, were amputees. Some were still in a lot of pain, but every single one of them had a great attitude.

"From there we went to Occupational therapy and there was a class going on with about 75-80 in attendance with the majorityof them being amputees also. I was given the opportunity to address them and it was an awesome time. We took my testimony in CD format and our Deadline Vietnam tract and gave them out to all that we came in contact with. I was then taken to a few private rooms to visit some who were going through some rough times.

"The Commander of the hospital, Colonel V. T. Deal came to welcome us and spend a little time with us.

"Well, I could write so much more, but this is getting pretty lengthy. It really was an awesome day for this Marine, who gave my legs 35 years ago, to visit and try to encourage so many young men and women who have given so much of themselves for you and I today. Please continue to pray for these heroes.

"P.S. I hope to get some photos up on our web site in the next few days."

God bless Tim Lee and our troops around the world.
Posted by Cindy Swanson at 11:43 AM