A teen blog worth recommending...and an upcoming movie worth avoiding 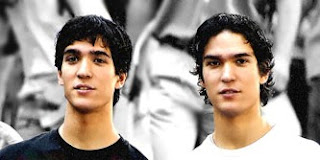 "The official definition of the 'rebelution' is 'a teenage rebellion against the low expectations of an ungodly culture.' When you look around today, in terms of godly character and practical competence, our culture does not expect much of us young people. We are not only expected to do very little that is wise or good, but we're expected to do the opposite. Our media-saturated youth culture is constantly reinforcing lower and lower standards and expectations.

"The word 'rebelution' is a combination of the words 'rebellion' and 'revolution.' So it carries a sense of an uprising against social norms. But in this case, it's not a rebellion against God-established authority, but against the low expectations of our society. It's a refusal to be defined by our ungodly, rebellious culture. Actually, we like to think of it as rebelling against rebellion."--Alex and Brett Harris (pictured above)

If there's a teen-ager in your life that you care about, there's a blog you'll want to let them know about. It's called The Rebelution, and it's written by Alex and Brett Harris, who just happen to be the 18-year-old brothers of Joshua Harris, author of I Kissed Dating Good-bye.

I read about "The Rebelution" on author Randy Alcorn's blog. When I checked it out, I found a lot of good stuff there. Actually, it's not only a blog, but a full-fledge website.

"Alex and Brett are the real deal—young men of character, depth, and eternal perspective. They're abandoned to Jesus. Their message is vital, for just such a time as this. Join the Rebelution!"

--I've been getting a lot of e-mails about an upcoming children's movie called "The Golden Compass," which is purportedly based on a series of anti-God books written by an avowed atheist. Well, guess what? The rumors are true.
The movie is being called "the anti-Narnia."

He [author Phillip Pullman] has described the Narnia Chronicles as grotesque, disgusting, ugly, poisonous and nauseating. Yet, as Michael Ward, an expert on Lewis, has pointed out, Pullman’s saga begins just as Lewis’s does with a girl hiding in a wardrobe and finding more than she bargained for. It is almost as if he wants to turn Narnia upside-down and then jump on it. While Lewis portrays rationalist atheists as comically ghastly and joyless, Pullman depicts priests as evil and murderous, drunk and probably perverted, and the Church as a conspiracy against happiness and kindness.

Set for release in December, the movie will star Nicole Kidman.

----The church that produced Facing the Giants is working on another movie, this one dealing with the issue of marriage. Fireproof is set for an August 2008 release.

--Head over to Taco Bell and get a free taco today, thanks to the World Series. (There is a time frame.)
Posted by Cindy Swanson at 7:50 AM

Thanks for the teen website, Cindy. I'll pass it on!

I mentioned another movie to be sure to see over on my blog.

thanks for the heads up on all of this!

What is Nicole Kidman up to? First she stars in a movie where she's taking a bath with a pre-teen boy who supposedly is her reincarnated husband, and now this??

As to the Rebulution guys, they were featured recently in World Magazine. It's encouraging to know there are young people out there who are passionate for the Lord and out to make a difference for Him.

I just found out about this movie and it makes me very sad.

The blog sounds very interesting. I'm going to pass it along to my own teens. Thanks for sharing.