A Tale of One Baby and Many Babies 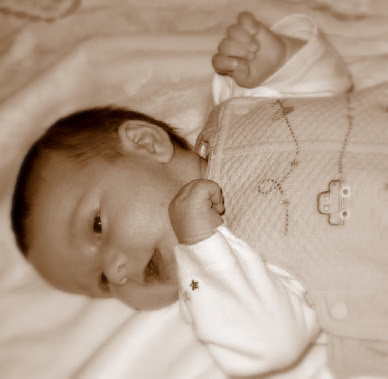 Today is NARAL's Blog for Choice Day, celebrating the upcoming 38th anniversary of the Roe v. Wade decision that legalized abortion.
I'm blogging for choice today, too--the choice for life.
I originally posted the following on January 22nd, 2004. Today I re-post it to participate in "Ask Them What They Mean When They Say Choice" Day.

When I was a junior in high school, I was delighted to hear that my older sister was pregnant with her third child. I adored my nieces, Shelly and Stephanie, and was looking forward to another little niece or nephew.

My sister gave birth that January to a beautiful little baby girl, and named her Deborah Leigh. But as perfect as Deborah looked, it quickly became obvious that something was wrong. Deborah's little heart was incomplete, and she died within a week of her birth.

Time does heal, and less than a year after Deborah's death, my sister was blessed with another little girl. My niece Cynthia Anne is grown up now, married and has her own babies.

But every year around this time, my sister experiences a season of sadness as she mourns the baby that never grew up.

My sister had never connected the two events. We were both struck with the irony. She still grieves the death of a baby on that day...the day that paved the way for millions of mothers to end the lives of their babies voluntarily.

Ironic, indeed.
Posted by Cindy Swanson at 7:12 AM