A Hero for Today 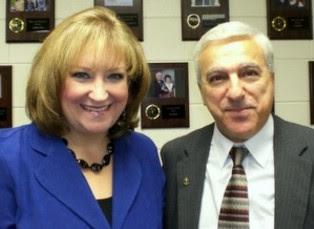 When American missionary Clyde Aynes answered the call to go to Beirut, Lebanon as a missionary in the late 1950's, he couldn't have known that a little Lebanese boy would grow up to impact so many lives.

That little boy is now missionary Edgar Feghaly, and I'm privileged to call him my friend.

Edgar was the keynote speaker this past week at our church's Missions Conference. In case you're not familiar with the concept of a missions conference, it usually consists of a few days of special meetings featuring missionaries reporting on their work in various parts of the world.

Edgar accepted Christ as a seven-year-old boy in Beirut, Lebanon. Fast-forward to 1965. My family sailed to Beirut to help in the missionary work headed by Brother Aynes and his family. That's when we came to know Edgar and his wonderful family.

A friend of the family

By then, Eddie (as we called him--and it's hard for me to think of him otherwise!) was a teen-ager. My sister Beverly was also a teen, and she recalls that she and Eddie had a great brother-sister-type relationship. They would argue and bicker, but also had great times together.

Even as a teen, Edgar was a big part of the ministry. He often interpreted for my Dad as he preached, or for my mom as she told Bible stories to the children. I can remember him hanging out with us in our home, even going on a trip with us once.

I was a little girl at the time, but I thought Eddie and his brothers, Ramon and Robert, were handsome and fun. They were always very sweet to me and my younger sister.

Our family lost touch with Edgar after we left Beirut due to Six Day War in June 1967. In the intervening years, Edgar came to America to attend college and married a lovely American girl named Rosann.

He ended up going back to Beirut to pastor there, and he has some harrowing tales of his life and church being spared despite being situated squarely in what became a Hezbollah stronghold.

The gospel to Iraq...and beyond

Now Edgar and Rosann are based in Tennessee, working with The Middle East and African Partnership to plant churches in places like Iraq, Lebanon, Jordan, Syria, Morocco, Liberia, Sudan and others.

Edgar is rather like a modern-day Apostle Paul, helping churches get on their feet and become independent, then moving on...but always making sure those churches are financially supported and checking on them to see how they're faring.

During the missions conference, Edgar told some amazing stories of terrorists and former Iraqi military leaders having their lives transformed by the power of Christ.

He believes that if not for 9/11 and the U.S. military involvement in Iraq, that country would never have been opened to the gospel, and countless Iraqis would never have had the opportunity to accept Christ.

I blogged earlier about one of my favorite stories told by Edgar--about our troops arranging a Christmas party for Iraqi children--here.

Edgar often reflects on what his life would have been like if a missionary had not shared the Gospel with him. He believes he would have either been a terrorist or dead.

Instead, the ripple effect continues. Edgar keeps sharing the Gospel with people, who continue to share it with others. The results will only be known in eternity.

In the meantime, I'm glad to call Edgar Feghaly my friend. He is a true hero of the faith.

You can find out more about the outreach to Iraq at the Gospel to Iraq website.
Posted by Cindy Swanson at 3:53 AM

I've always believed that missionaries are the real heroes of the faith. I wonder about something. When we get to heaven, I think that it'll be the missionaries that will get the bigger rewards. I don't think the tele-evangelists and the people on TBN will be the first in line. I know I sound acerbic, but modern day Christianity in America is suffering for true sold-out saints. You of all people know the importance of missionaries. Thank you for a great post that awakens the true hope of the gospel in my life.

Wow, praise God for Edgar, and thank you for sharing him with us! What a hero!