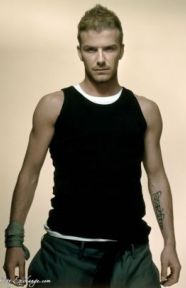 (OK, this has nothing to do with the pic you see of soccer star David Beckham...more on that in a bit.)

I've received the Madalyn Murray O'Hair hoax e-mail so many times, I'm leery of e-mails that raise the alarm about religious freedoms. But this one is for real, and I believe demands real action.

Focus on the Family Action has launched its first-ever petition drive against a provision in a Senate ethics bill that they believe would drastically limit free-speech rights.

In a nutshell, SB 1--Section 220 would make it extremely difficult for Christian action groups like Focus and the American Family Association to keep Americans abreast of important issues being discussed and voted on in Washington. Such groups would apparently be subjected to miles of red tape, and it would even impact the ability of Focus Action Chairman Dr. James Dobson to speak out on such issues on his daily radio program.

Says AFA chairman Donald Wildmon, "To put it bluntly, members of Congress are tired of getting your e-mails and phone calls, and Senate Bill 1(Section 220) is designed to keep information from you that might inspire you to call or write your senator."

To find out more and to electronically sign a petition--ironically, the very thing some senators want to take away from you--go here.

I'm not normally a bandwagon-type activist, I don't often use my blog to take a political stance, and I tend to be rather cynical about some things. But if you're the type of Christian that picks your battles, I believe this is one that needs to be picked.

Hey Senators, guess what? We elected you to represent us, and hearing our gripes and opinions is all part of the job, whether you like it or not.

And while I'm ranting..
Conan has crossed a line

I've laughed just as hard as anyone at Conan O'Brien, and I generally feel he's a very likable personality. But reports of a skit on his show involving a "homophobic country western singer," whose song is truly outrageously blasphemous, leave me cold. Actually, leave me angry. This is really disgusting. Conan's show has crossed a line.

I agree with those who have already opined that this would NEVER be tolerated if it was joking about Buddha, Muhammad or any other religious figure.

Whew. This is NOT a popular time to be a Christian.

And, totally turning a corner...

Here's the reason for the pic you see above...

It looks like international soccer superstar David Beckham, will be making the leap across the pond. He's expected to sign with the L.A. Galaxy soccer team.

Apparently Beckham believes he needs a challenge and that he can help make soccer a more popular sport here in the US. He thinks football, basketball and baseball have eclipsed soccer here thus far, but he hopes to change that.

It will be interesting to see if he can succeed. Oh, and Beckham is married to former Spice Girl Victoria Beckham, who reportedly has acting ambitions, so living in LA will be oh, so convenient.

Now, I hope you'll go out and have a blessed and wonderful weekend...