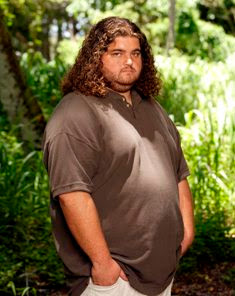 OK, you all now how much of a "Lost" fan I am. Still, I realize that Jorge Garcia, who plays Hurley on the show, is just a guy...an actor...a person of no more worth or importance than you or me. I'm sure he puts his pants on one leg at a time. That being said....

Here's the deal. My last post was a repeat of "Lost" trivia that I've posted in the past. One of the bits of trivia that I got from either imdb.com or tv.com was that Jorge Garcia initially tried out for the role of Sawyer (along with Matthew Fox and Dominic Monaghan.)

"To say I auditioned for the part of Sawyer is not quite accurate. I knew when I went to the audition that I wasn't up for that particular part. They just wanted to see me do something and that's the material they had."

As those of you familiar with Blogger know, you can click on any commenter's name and be taken to their profile, which will include a link to their own blog. In this case, I was taken to Dispatches from the Island.

All I can say is, I could be wrong, but this blog really looks like it might be written by the real Jorge Garcia--or, I should say, the one who plays Hurley on "Lost." (I'm sure there are any number of Jorge Garcias blogging in the world.)

So if you're the Jorge who plays Hurley, thanks for visiting my blog and clearing up that erroneous bit of trivia! We like you being Hurley. In fact, I honestly can't imagine anyone else being Hurley...or anyone besides Josh Holloway being Sawyer, for that matter!

And I have to tell you, I've blogged about my Hurley love before. Like when I recently did a Thursday Thirteen of my favorite TV characters of all time--and Hurley was one of them:

Hurley's down-to-earth sense of humor is one of the things that keeps the show from spiraling into inaccessible weirdness.

And when I posted about 13 reasons why I love "Lost," Hurley was one of those, too:

Hurley is absolutely vital to the show. For a while, I was watching "24"fairly regularly, and it's excellent--but there is almost no comic relief, if any. The intensity blasts you nonstop. But the great thing about "Lost" is that just when everything gets a little too spooky, scary or strange, there's Hurley saying, "Dude..." and bringing everything back down to earth. I totally love Hurley.

Wow. I'm almost as excited as my friend Linda at 2nd Cup of Coffee got when she was contacted by Clinton Kelly of "What Not to Wear"!
Posted by Cindy Swanson at 4:06 AM

This is just SO cool, Cindy! Congrats on the celebrity google!

That was cute. I'm printing this page up to add it to my scrapbook. (Well to send to my sister who scrapbooks my stuff for me.)
I found your post because it came up on my google alert. (It's a trick Dom had taught me)

And yes it really is me.