"Amazing Grace" is out on DVD now

"We went, overall box office worldwide, over 30 million dollars, which really sent a signal that you can make a movie based on a historical figure who is motivated and inspired by his newfound faith, and that it's going to find an audience."--Chip Flaherty of Walden Media

Back in February, I interviewed Chip Flaherty, the executive vice president of Walden Media, about the movie Amazing Grace, which was about to be releasd in theaters.

Walden Media is the production company behind such movies as "The Lion, the Witch and the Wardrobe," "Charlotte's Web," and "Bridge to Terabithia."

"Amazing Grace" is now available on DVD, and I had the pleasure of interviewing Chip Flaherty again the other day. 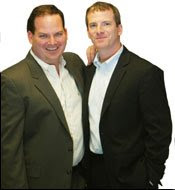 In this sound clip, Flaherty talks about the terrific response to "Amazing Grace," both in its theater release and now on DVD.

In this sound clip, Flaherty talks about the advantages of owning the DVD:

Christian fiction lovers will be happy to know:

I just interviewed beloved author Francine Rivers about the new hardcover edition of her classic bestseller, Redeeming Love. And it's true: she IS working on a full-length novel...her first in quite a while!

Francine tells me the plot centers around four generations of women who are forced together because of a flood. She says the book is going to be pretty lengthy, with a lot of dialogue and insight about how women of different generations view their faith.

If you love Francine Rivers as I do, the thought of a hefty Rivers novel will be right up your alley!

She says the manuscript is due in August of '08, so we're looking at spring or summer of 2009 before it will be released. Something tells me it will be well worth the wait.
Posted by Cindy Swanson at 8:22 AM

We love, love, LOVE "Amazing Grace". That film is a balm for the soul. It's great to see Walden bucking the trend, particularly when theyr'e so successful at it. :)

"Grace" made me think, big time, about abortion.

Francine's daughter sounds pretty smart! Ha! Ha! I love the idea of inter-generational dialogue between women (at least, if it's not happening in my house!).

I've never even heard of Amazing Grace! Thanks for the recommendation. I'll Netflix it.

Okay, I mean, I've heard of Amazing Grace (the concept, the song, etc.) I meant the movie. Duh. Sorry.

I can't wait to see this movie!