When was the last time you wrote a letter? 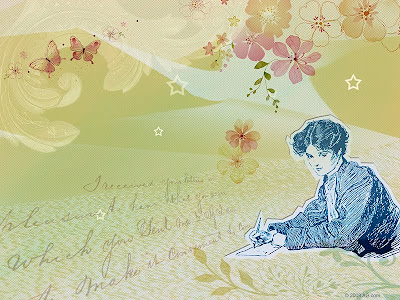 
"Will this fading generation... also be the last to write letters? Messages crafted by hand rather than bits of binary code? Writing that carries emotions rather than emoticons?

"...Think of letters and the mind falls on Paul of Tarsus, Abraham Lincoln, Jane Austen, Mark Twain; on love letters written during the American Civil War, or letters written to a parent by a frightened soldier at the battlefront..."--Catherine Fields, The New York Times

Today is Long Letter Day, billed as "a time to stop and write that long letter to an old friend."
Which begs the question, does anybody write letters anymore? Should we? Why?
I myself can't remember the last time I wrote a letter. E-mails, sure. Texts just to say "I love you" or "I'm praying for you." But a letter?
This New York Times article by Catherine Fields, "The Fading Art of Letter-writing," opens with Fields' description of the regular letters she gets from her 75-year-old aunt in England.
Fields writes:

"A good handwritten letter is a creative act, and not just because it is a visual and tactile pleasure. It is a deliberate act of exposure, a form of vulnerability, because handwriting opens a window on the soul in a way that cyber communication can never do. You savor their arrival and later take care to place them in a box for safe keeping." 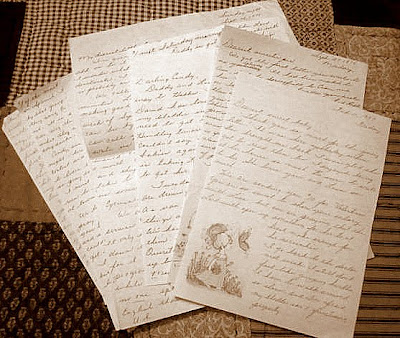 Some of the many letters my mom wrote to me when I was in Bible college in the late 70's--I saved all of them!

As a Bible college student, far away from home in the late 70's, my mother's regular letters were a lifeline. There was no e-mail, no cell phones, so these loving, chatty missives were like cherished gifts showing up in my otherwise-empty student mailbox.
My husband and I were apart for some two months prior to our marriage in 1978. Somewhere in my house are the letters we exchanged during that time--sweet, naive, romantic and probably somewhat cheesey expressions of our love. Do modern couples have this testament to their devotion? 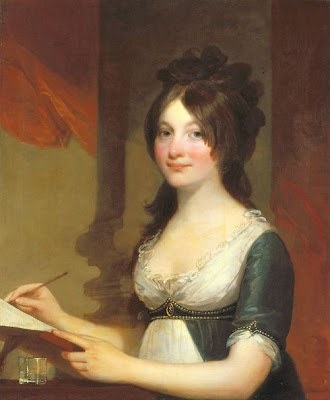 via
Apparently there are those in the younger generation who are trying to revive the art of letter-writing. Letter-writing clubs like this one are springing up all over the world, where members meet just to put pen to paper to "go back to the old-fashioned way of sending their regards."
Witness blogs like LetterLover.net ("where the written word lives on"). Blogger and written-word advocate Samara O'Shea writes:

"...there is nothing—not a text message, not an IM, not a Facebook status update—that competes with the emotional connection made through a letter. Handwritten or typed, snail-mailed or handed over—doesn’t matter. It’s the time you take to choose your words carefully and write them down that becomes a tangible testament to how much the other person means to you." 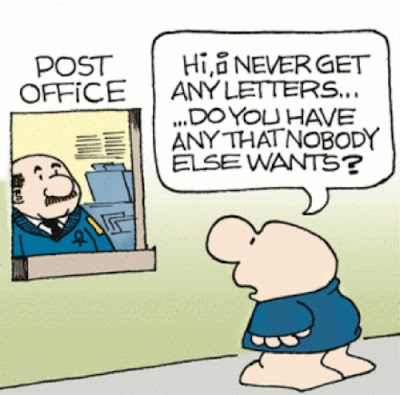 
I doubt that I'll start conducting all my correspondence by snail-mail. But I do feel the urge to bring letter-writing back into my life, at least occasionally!
What about you? Do you ever write letters? Do you enjoy getting them? Do you think it's an art that needs to be preserved? Let me know!
Posted by Cindy Swanson at 12:08 PM

I write letters all the time! Because of the times, I never recieve any back. I think I write great letters, but my hand writing is horrible. :D

That last photo is sad :(
I write letters, A LOT! I joined SwapBot and Postcrossing where you can get swaps from all over the world. Even with the existence of text messaging and Facebook, I still love the old-school letter-writing and snail mail. :) There's a different joy from it :D

I havent written a letter in years, I am sorry to say. I do however always send postcards when travelling.
Happy weekend wishes from Norway :)

I just wrote a letter last night! I have a handsome penpal :)