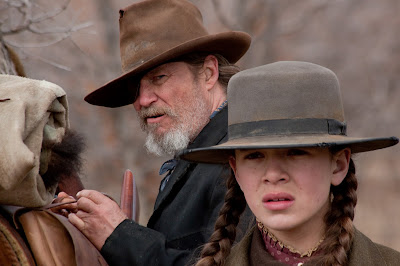 "You must pay for everything in this world, one way and another. There is nothing free except the grace of God."


Every once in a while, a movie comes along that doesn't make me regret I spent a couple of hours of my time watching it...in fact, I regard it as an uplifting experience.

Such was the case with True Grit.

From the moment I saw a verse from Proverbs on the screen, listened to the soft piano notes playing "Leaning on the Everlasting Arms,' and heard the female narrator utter the quote above, I knew this was going to be a special movie.

I had never seen the 1969 version of the movie, starring John Wayne, Glenn Campbell and Kim Darby. And I'm actually glad I hadn't. I had nothing with which to compare this movie, and I have a feeling I might find the original movie lacking. One reviewer called the new version "not so much a remake as a masterly re-creation."

Hailee Steinfeld as 14-year-old Mattie, who is determined to capture her father's killer and avenge his death, is a marvel. From the moment she appears on the screen, we're charmed.
Mattie's young face is a canvas for emotions ranging from stubbornness and coolness to fear and excitement. Her articulate intelligence and naive but confident courage are wonderful to see.

Apparently, Joel and Ethan Coen (the producers) wanted to be faithful to Mattie's characterization in the Charles Portis book on which both movies were based.

Mattie Ross "is a pill," said Ethan Coen in a December 2010 interview, "but there is something deeply admirable about her in the book that we were drawn to," including the Presbyterian-Protestant ethic so strongly imbued in a 14-year-old girl. Joel Coen said that the brothers did not want to "mess around with what we thought was a very compelling story and character". The film's producer, Scott Rudin said that the Coens had taken a "formal, reverent approach" to the Western genre, with its emphasis on adventure and quest. "The patois of the characters, the love of language that permeates the whole film, makes it very much of a piece with their other films, but it is the least ironic in many regards."

Jeff Bridges is wonderful as the gruff, eye-patched Marshall Rooster Cogburn who initially doesn't want anything to do with Mattie's quest. In a very moving climactic scene, though, Cogburn becomes the father Mattie needs when she needs him most.

Ultimately we realize that although Mattie wanted Cogburn's help because she heard he has "true grit," it's Mattie that has that quality, in spades.

The ending was a bit anticlimactic (not sure, but I think I might have preferred the way the original movie ended it). And I wouldn't watch this with younger children; there are a few violent scenes, one in particular that's fairly grisly.

For me, these virtues were what made the movie worthwhile. Along with terrific acting, a compelling story, and the welcome realization that the great Western isn't dead yet--and that good movies can still be made.

Posted by Cindy Swanson at 6:00 AM

Good review. I did see the original many years ago, and can't remember how it ended.

Great review, I must see this film, not sure how I missed it in theaters!

I have an amazing Giveaway from the Artisans at Novica. You will love it!

We watched this movie last week and even though i didn't catch the beginning, I was captivated by the rest. Scripture and hymns plus plot and acting were stellar. Ending could have been better, I agree.

I saw the Coen brothers' adaption of True Grit in theaters, and by the time the end credits hit, it was my favorite western. It's a uniformly superb film, with great acting, an awesome showdown, and some themes worth thinking about. You can read my review of it here:

I loved it as well, but I love basically anything the Coen's do so that's not surprising. Here's a great article about the costume designer, she did such an amazing job!

Thanks for visiting and commenting.