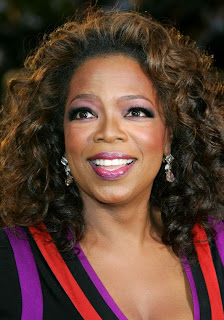 --Farewell to Oprah? Not so much. Although the final season of her talk show kicks off today, she's starting her own network.

How do you feel about Oprah? Well, I certainly don't care for the hodge-podge of New Age teachings and anti-Biblical religion that she actively promotes.

However, as a media person myself, I can't help but admire a lot of things about her. I usually only watch her show if it's on while I'm getting a pedicure or waiting in some office that has a TV on. But I have to admit, her shows are always engaging, and she's a terrific interviewer.

I'll never forget how she was the first person to interview Michael Jackson in depth and get to the bottom of some of his weirdness. She did a fantastic job with that.

I actually got to go to a live taping of Oprah's show, ages ago, before it really got huge. It was a nice experience (unfortunately it was before she started the practice of giving away freebies to her audience!). During commercials, she would chat with the audience in a very friendly and down-to-earth way, and afterwards we got to meet her and shake her hand (while she stood between two enormous and imposing bodyguards.)

In any case, we haven't seen the last of the empire that is Oprah.

Stuff around the blogosphere...

--At The Diabetic Snob, the joys of lightly frozen Evian water.

--If you enjoy vintage clothes, World War 2 memorabilia, and generally the beauty and grace of a previous era, you'll love Diary of a Vintage Girl. The author is a vintage clothing model and collector, and visiting her blog is really like stepping back in time.

--And this isn't actually a blog, but a YouTube video. Two of my favorite beauty gurus--British sisters and professional make-up artists Samantha and Nicola Chapman, AKA Pixiwoo--literally had me laughing out loud as they went to great lengths to test out the claims of various waterproof mascaras. Check it out here. Funny and cute!
Posted by Cindy Swanson at 7:48 AM