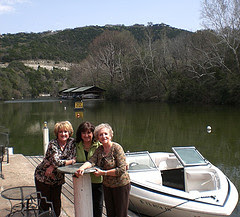 Bev, me and Mom at County Line BBQ

One of the joys of going to Texas is...well, eating.

There are a few things I HAVE to eat when I'm in Texas. One of these is Tex-Mex food. The Austin area has the best Tex-Mex food I've ever eaten. One of my favorite restaurants is Chuy's, and yes, I enjoyed the chicken taquitos there one day during my recent visit. They also have some of the best chips and salsa ever. I simply cannot find salsa that delicious in northern Illinois...I'll tell you if I ever do.

My sister Lisa was also kind enough to buy me a Chuy's T-shirt. It simply reads "Chuy's" on the front, then "Keep Austin Weird" on the back. "Keep Austin Weird" is a catchphrase often seen around the area. I assume it has something to do with the city's funky, artsy, liberal vibe.

Interestingly enough, Round Rock--which is north of Austin and is where much of my family actually lives--has its own slogan, seen on bumper stickers and the like: "Keep Round Rock Mildly Unusual." I thought that was cute. I've also heard there are actually bumper stickers that say "Keep Dallas Pretentious."

We actually didn't make it to one of my very favorite Tex-Mex restaurants--Pappasito's. Actually, we made it, but we left after being informed of a 2-hour-45 minute wait. 2 hours and 45 minutes! I don't think so. (Maybe it's time for them to add another Austin location?)

One of the most enjoyable eating experiences, though, was at The County Line Bar-B-Q. My mom and sisters and I went to the location on Bull Creek off Lake Austin, and the atmosphere was as enjoyable as the food.

It was a lovely spring day, and we strolled along the creek after our meal (see picture above). We were able to get a table immediately, it being toward the end of lunchtime, but my sister Lisa tells me that people normally enjoy the outdoor waiting area during the evenings when waiting times are longer. Often there's live music outdoors.

I had the "lite lunch," with two meats--brisket and turkey--potato salad, beans and cole slaw. This was some of the best cole slaw I've ever had. The taste was much milder than cole slaw usually is, and the cabbage was cut in small pieces rather than being shredded. Wonderful.

And the bread...oh, the bread! Served loaf-style, cut in thick slabs with little tubs of honey-butter for slathering. My only complaint: the bread isn't gratis with the meal--you have to order it extra. At 2.49 for a half-loaf, that's not bad, but I appreciate it when restaurants bring a basket of bread to the table right off the bat. (I appreciate it, but my figure probably appreciates not having it there for me to over-indulge in.)

No discussion of Texas culinary delights would be complete without mentioning Round Rock Donuts.
These light-but-substantial, golden-colored donuts have officially become my favorite, surpassing even Krispy Kreme. At least once per visit, my sister Lisa dutifully shows up with a supply, fresh, warm and delicious. If you ever have the means of enjoying them, I highly recommend it!