I was a no-show for the Oscars

Nope, you wouldn't have found me sitting in front of the TV checking out the Oscars last night. I hadn't seen any of the movies nominated for best picture; I didn't feel like being a spectator to the fawning over Al Gore (whose An Inconvenient Truth documentary was, predictably, a winner); I wasn't up for the pious and self-satisfied concern about how "green" anyone or anything is; and I'm generally annoyed with Hollywood, because they tend to champion and adore things I pretty much deplore and abhor. (Wow, I didn't even intend for that to rhyme!)

That said, I was very happy to hear that Jennifer Hudson won Best Supporting Actress for her role in Dreamgirls. As I've blogged earlier, I rooted for her before she met her untimely demise as an American Idol contestant. I think she's an extremely talented vocalist. I haven't seen Dreamgirls, so I guess I'll have to judge for myself later as to whether she's also an extremely talented actress, as appears to be the general consensus.

It will be interesting to see what career path she now takes. It' s not uncommon for Oscar winners to see their careers go downhill from there, at least for a while--think Marisa Tomei and Mira Sorvino. Hope that doesn't happen to our JHud.

If you're interested, here's a Chicago Tribune article on Jennifer's amazing week.
*******
I Feel So "Alive"! 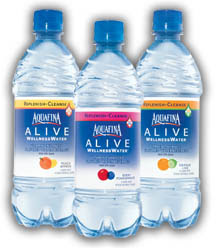 See these bottles pictured here? This is one of my favorite new treats, Aquafina Alive.

According to a PepsiCo news release:

Aquafina Alive, made with a splash of fruit juice, is a good source of
Vitamin E, Vitamin B6, Vitamin B12 and Niacin. Every eight-ounce serving has
only ten calories and provides 10% of the Daily Value of each of these important
nutrients.

"Consumers have told us that they're looking for simple things they can
do for their health," said Ahad Afridi, vice president, Aquafina. "Aquafina
Alive provides the benefits they seek. It tastes great, is enhanced with
vitamins, yet low in calories, making it an easy way for consumers to replenish,
hydrate and feel their best."

I love it because I'm trying to lose weight, and I really don't care much for diet drinks. Alive quenches my thirst, gives me a splash of flavor, and makes me feel as if I'm having something nutritious. And I didn't even get paid to say that. :)