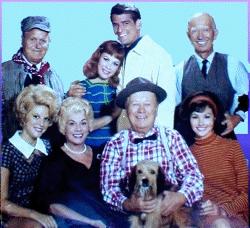 It's funny how one random thought will spark a chain of memories. The other day, I had a random thought about actress Lynda Day George. That triggered a "whatever happened to her?" thought, and of course, I had to check out the internet to try to find out.

According to Wikipedia, George, who was married to the now-deceased actor Christopher George, is officially retired from show biz, re-married and living in California.

Anyway, while looking for info on Lynda, I came across the fact that she was often confused with actress Linda Kaye Henning of Petticoat Junction...apparently because of the similarity in their names.

Thinking about "Petticoat Junction" brings back a lot of great childhood memories. My family had just returned from being missionaries in Beirut, Lebanon. Color TV was just becoming widespread, and there were a lot of harmless, fun, family-friendly shows on TV. "Petticoat Junction" was one of my favorites.

I loved Kate, who was played by the wonderful Bea Benederet, and was sad when she died of cancer in 1968. The show was never the same after that.

I understand that you can buy the show on DVD now, and I've resolved that I'm going to do so as soon as possible.

How about you? Anybody have fond memories of the good old days of TV? Let me know in my comments section. (By the way, my 19-year-old daughter thinks Petticoat Junction sounds silly. What does she know? :))

If you have a moment, check out this story. Apparently the blogger did not write it himself, and it's in slightly broken English, but you'll get the point...and it's a very good one.

A good night for AI

They sang the standards last night, and I thought everyone except Kellie shone. I think Katharine could BE the next Idol, but I'm still pulling for Paris and Elliott.
Posted by Cindy Swanson at 9:43 AM