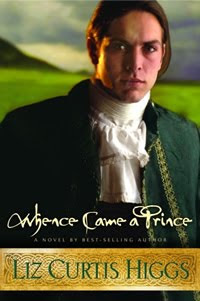 When Liz Curtis Higgs began writing "Thorn in My Heart," she had no idea it would turn into a series of books. True, Higgs believes her decision to set the Genesis story of Jacob, Leah and Rachel in 18th-century Scotland was God-directed. But she didn't know that Leah/Leana's story would be followed by "Fair is the Rose," which focuses on the Rachel character. And now, there's "Whence Came a Prince,"(Waterbrook Press), the story of Jamie, who is the 18th-century Scottish equivalent of Jacob.

I read and enjoyed both of the first two books, but let me tell you, Higgs has outdone herself with "Whence Came a Prince." Her style of writing--always beautifully flowing, lyrical and evocative--has truly blossomed into full flower in this book.

If you haven't read the first two books, you're probably asking, "Wait a minute---Jacob was married to Leah and Rachel at the same time. How does Higgs pull that off in 18th-century Scotland?" I had the same question when I first started reading the books. But pull it off she does, albeit using some creative liberties with the story. You’ll have to read them yourself to find out exactly how she does it.

Higgs has saturated herself with Scottish culture and ambience, with repeated trips to the country she now calls her second home-- and the fact that she's availed herself of the lore in hundreds of Scottish research books is obvious in the telling of these stories. But her meticulous research is seamlessly interwoven into the fabric of the story.

Jamie comes across as flawed, but charming as well as humble and repentant--as tricky as his Biblical alter-ego, but no less attractive and lovable for his flaws. As we've seen in the earlier books, he has escaped the consequences of deceiving his father, and fled from his brother's wrath by venturing across Scotland to the area of his mother's birth. He has fallen head-over-heels in love with the beautiful Rose, only to be thrown together with the less stunning but appealing Leana, who he grows to love as well.

In "Whence Came a Prince," Jamie is living with the hand that God has dealt him, albeit with some sadness and regret. The situation with his hateful, cheapskate uncle Lachlan is coming to a head, and Jamie must return to the land of his father. But does the murderous anger of his brother await him? And how will the situation with the two women he loves be resolved?

Higgs' sensitive empathy with her characters brings them to life and makes us feel their pain, their joy, their faith, transporting us into their world to the point that we're sad when the story is over and we have to close the book.

But it's not over yet. The fourth book in the series-that-wasn't-supposed-to-be-a-series, "Grace in Thine Eyes," will tell the story of Jamie's daughter Davina.

Note: For more of my book reviews, go to the reading page of my website.
Posted by Cindy Swanson at 8:39 AM