Two of the Best Time Travel Books You'll EVER Read 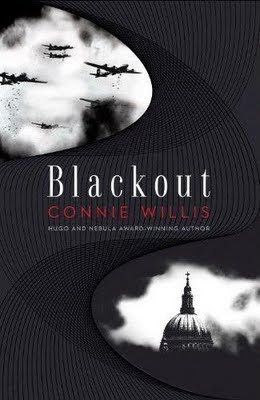 Note: This review was originally posted on my book blog on 5/24/11

First of all, why am I reviewing two books at one time?

Take note: Do NOT read Blackout without a copy of All Clear right next to you. The two books are basically one book.

No, I don’t mean All Clear is a sequel to Blackout. I mean, they are two parts of the same book.

I, unfortunately, did not realize this when I checked Blackout out of the library and devoured it--only to get to the end and a message saying something to the effect of, "this story will be continued in the next book..."

Naturally, my library didn't have All Clear on the shelf when I raced back to get it, so I had to wait a few days.

The fact that I read this enormous book in one day (granted, it was a day in which I had not much else to do, and I'm a fast reader) is testimony to what an extremely good book this is.

I read Willis' To Say Nothing of the Dog after reading a review of the book by one of my favorite reviewers, The Ink Slinger. His review prompted me to buy the book, and began a small mini-obsession with books by Connie Willis.

I've quickly surmised that my favorite books by Willis are those that involve time-traveling historians from Oxford, England, in the late 2050's.

Blackout begins in Oxford with a few historians preparing for trips to World War 2 England.

Merope (who is going by the name Eileen in the past) is observing evacuated children at a rich lady's estate. Michael plans to go to Dover. Polly...who has already experienced V-E Day on a previous "drop" (as they call time traveling sessions), wants to experience London during the Blitz.

Fortunately, unlike most time travel related books I've read, these historians are totally prepared. They've been prepped on the fashions, manners and lingo of the time they're visiting. Polly even knows exactly where each bomb will fall during the time she's in the Blitz, so she can avoid those places.

Despite all this, all three time travelers quickly realize that something has gone wrong. They can't get their drop sites to open...which means they're stuck in the past.

Just at a critical point, the book ends abruptly. I mean, ABRUPTLY. That's why I'm telling you to have All Clear on hand so you can pick it up immediately!

During the time I was waiting to get my hands on a copy of All Clear, I read some extremely negative customer reviews of Blackout on Amazon.com

I could actually relate to some of the criticisms. For one thing, I agree that neither book needed to be quite as long as they are...and they are both very long books. There is quite a bit of redundancy and extraneous stuff that could have easily been trimmed down.

However, one of the common criticism was that Blackout introduced some characters whose stories seemed to go nowhere.

Well, those characters reappear in All Clear, and they are vital to the story. 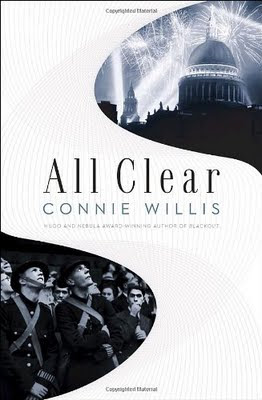 I don't think it would be too much of an exaggeration to say that All Clear is one of the best books I've ever read.

The suspense builds, with heart-quickening intensity, throughout the entire book. The criticism that Merope, Polly and Mike were hard to care about is totally voided (in my opinion) in the second book. I absolutely cared about them, and was vitally concerned about what was going to happen to them.

In Blackout, it was becoming obvious that something was going wrong with time travel. As All Clear picks up the story, the fear that the time travelers have done something to dangerously alter the space-time continuum solidifies.

And there's a lot at stake. If the historians have done anything, however small, to affect the course of history, then Hitler could have won the war, and we'd all be German-speaking slaves of the Nazi regime.

I have to say that I came away from these books with something akin to awe for the British people who lived through World War 2, especially the Blitz. "Keep Calm and Carry On" wasn't just a cute poster for them. It was their life.

Can you imagine having to go through your daily life, going to work or school as if everything was normal, only to be constantly interrupted by air raid sirens and having a short amount of time to get to a shelter? Not to mention the shortages of food and clothing, and the frequent news that someone you knew and maybe loved had died on the very streets where you lived.

Yet the British people did this, with amazing strength and courage. These books were a vivid and fascinating history lesson for me.

I heartily recommend these books, under a few conditions:

For me, the journey was well worth it.
Posted by Cindy Swanson at 8:19 PM

Blackout!! Is that the story of last night's Super Bowl?? Just kidding, thanks for the book reviews...it always helps me to find a good read to see what other's like me think!