My thoughts on last night's "Lost" 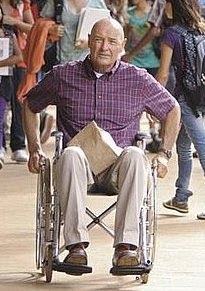 SPOILER ALERT! if you haven't watched it yet

These are just some random thoughts that popped up as I watched the show. Feel free to add comments!

Last night's episode was Locke-centric, and it was what the the show's producers are calling a "flash-sideways"--it showed what Locke's life was like in the alternate reality that apparently would be taking place if the plane had never crashed originally.

--It was nice to see Locke in an apparently great relationship with Helen...planning his wedding and obviously both of them very much in love.

--Apparently in any reality, Locke's boss Randy is a real jerk.

--If you paid attention during earlier seasons, it was no surprise to you that Hurley owned the company where Locke worked.

--It seems in the alternate reality, the Losties are there to help Locke in some way. Jack wants to give him a consult about his spinal paralysis...Hurley helps him get another job...Rose is the manager of the temp agency Hurley sends him to...

--Of course, never having gone to the island, not only is Locke still paralyzed, but Rose still has terminal cancer.

--I loved Sawyer's attitude in this episode. Two of the best lines of the night (not word-perfect): "I don't care if you're dead, alive, or the ghost of Christmas past" and "I guess I'd better get some pants on."

Another great one was Hurley's comment about Locke's boss, Randy. Spot on. :)

--What's the connection between the Losties and the numbers assigned to them by Jacob?

--Last but not least, I was happy to get a reprieve from scenes revolving around the temple. Frankly, the temple and its boss kind of bore me.

Interesting tidbit: It pays to pay attention to EVERYTHING on "Lost," even background music. Apparently, as this blogger tells us, the song Sawyer was listening to while drunk in Otherville said a lot about his own experiences:

"..seriously, they do cover every detail! It’s stuff like this that makes me realize nothing happens by accident in this show! 'I’m the runaway son of a nuclear a-bomb…Baby detonate for me' – what a perfect song to help work through Juliet’s a-bomb detonation death! And it leaves me wondering what this forgotten boy is searching for, searching to destroy?"

Your thoughts? I'd love to hear 'em!
Posted by Cindy Swanson at 6:53 AM

Email ThisBlogThis!Share to TwitterShare to FacebookShare to Pinterest
Labels: "Lost"

Maybe I wasn't paying close enough attention, but weren't the numbers assigned to the names on the rock the same numbers that have played a roll in all seasons (Hurley's lottery winner, numbers punched into computer, numbers on the hatch)?

Yes, Robin, they were!

I am finally caught up!
First, I loved Locke and am so sad that the real Locke is dead.
I think the fake Locke is definitely bad. The reason he doesn't have faith off the Island is because the Island is what gave him faith.
I did notice the song Sawyer was listening to.
I'm disappointed that he followed bad Locke, but maybe he will come around.
I felt like Locke was really the main, central character, so it was weird for him to die, although he is sorta still a character, but it's not really him.
And why do they keep calling him Locke? They should call him smoke-monster man.