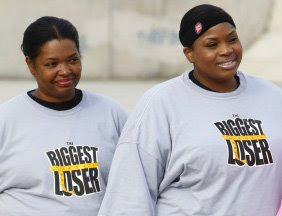 Biggest Loser's Joelle takes her place in the figurative Biggest Loser Hall of Shame, right up there with last season's Vicky, after her shenanigans on last night's episode.

The condition was that the partner on the ranch had to work hard to keep from getting eliminated so their partner could come back in 30 days.

Joelle almost blew that! While Carla gamely soldiered on at home, Joelle dallied around, never giving it the "150 per cent' that most participants say is need to stay in the game.

Last week, she kicked it up a notch and rallied for a respectable weight loss, insuring Carla's return. I applauded her change in attitude and hoped it would continue.

It didn't. Once Carla returned to the ranch, Joelle returned to her slacking ways. Last night, while Carla lost 9 pounds, Joelle lost ZERO--a rarity on the ranch, where everyone's job (as trainer Bob said last night) is just to exercise and lose weight.

While--in my opinion--Joelle never garnered the level of intense dislike that last season's Vicky did, she was easily one of the most annoying Biggest Loser contestants ever.

She wasn't mean, like Vicky was (or at least appeared to be). She was just selfish and lazy. At least Vicky was a competitor!

The follow-up at the end of the episode showed us that Carla and Joelle haven't been able to patch up their friendship, which isn't surprising. But it did show that both of them have continued to lose weight at home. Good for them. The former worship leader at Beloit, WI's Faithbuilders International, and his friend are through to the next round on American Idol...and color me WOWED by Danny Gokey's voice once again!

Here's a link to the video of Danny Gokey and his friend Jamar's segment.

And more about their connection to Faithbuilders here.

Danny is the one whose wife passed away just weeks before he initially auditioned. Last night he sang "Kiss from a Rose," and...again...WOW. He and David Osmond are two I will really be pulling for.

Posted by Cindy Swanson at 6:07 AM

I can't watch AI, because I get so nervous for the contestants and don't want them to fail! Same reason I can't watch figure skating or gymnastics in the Olympics! But, I know Mom loves it!

Danny is one of my favorites on AI. I also like the oil rig worker from Jasper, TX. There are so many others right now, I can't remember them all, but next week's episodes should help me get them straightened out. Oh, and what about Jason Castro's brother? I haven't seen him in a while.