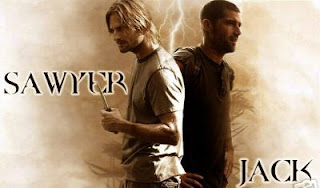 It's been quite a while since I've done a Thursday Thirteen, and apparently during my lengthy hiatus, the meme is actually under new management!

For those of you who've been reading this blog a while, yes, this is a re-run. However, I have "Lost" on the brain, since I'm heavily embroiled in the new season. I have added some new thoughts in italics.

How about that episode last night? I loved it. Somehow, I felt that it captured the spirit of some of the earliest episodes of the show.

I know the time travel aspect is confusing, but that doesn't really bother me--when has the show been simplistic?

The bottom line is, we love the characters. We're invested in them, and that's what brings us back.

Let me know your thoughts in my comments section.

1. Jorge Garcia (Hurley) was the first person cast for the series.

2. In the original description for Kate (Evangeline Lilly), she was a slightly older woman separated from her husband, who went to the bathroom in the tail-section of the plane. However, that idea ended up being used for the character Rose. (Note: where are Rose and Bernard now that the islanders are time-jumping! Bring them back!)

3. Josh Holloway was trying to cover up his Southern accent while he was shooting several of his first scenes in the first season. It wasn't until director J.J. Abrams told him that the reason they cast him was BECAUSE of his accent that Holloway changed it. There are still some scenes left in the pilot where Holloway doesn't use his Southern accent. (Spoiler warning: Did he kind of break your heart last night when he glimpsed Kate? I'm a Jater--someone who thinks Jack and Kate should be together--but that doesn't stop me from loving Sawyer.)

4. Jorge Garcia, Matthew Fox, and Dominic Monaghan all auditioned originally for the part of Sawyer as the other characters had not been developed at the time. (I miss Charlie! Do you think we'll see him again on the show? Did anyone catch Dominic Monaghan on "Chuck" the other night?)

5. Michael Keaton was considered for the part of Jack, but turned it down. Had he accepted, he would have been killed off in the pilot episode. (Wow...glad that didn't happen, on both counts.)

6. Charlie (who sadly died in last season's finale) was in a band called Drive Shaft. Their only hit was called "You All Everybody". That song can be heard in the background of an episode of Alias, another show created by JJ Abrams.

9. There is a common misconception that since Claire (Emilie de Ravin) is eight months pregnant and in her third trimester, the airlines wouldn't have allowed her to fly. While airlines may not necessarily recommend flying when eight months pregnant, they cannot and will not prohibit a pregnant woman from taking a flight if she really wants or needs to. (I do hope we see more of Claire on the show...it would be nice to have an explanation as to what exactly happened to her character.)

10. Evangeline Lilly (who plays Kate) and Dominic Monaghan (who played Charlie) were engaged to be married to each other in real life until just recently. (Actually, I think they may have re-united again recently...not sure of the latest on that. And didn't Kate look gorgeous on last night's episode? I bet she wishes she could take a straightening iron back to the island with her!)

11. Naveen Andrews' character, Sayid, is Iraqi; but in real life Andrews is of British and Indian origin. (Sayid has definitely turned into the kind of character you would want in your corner--and by your side in a dark alley. )

12. A goof in one of the earlier Desmond-centric "time-travel" episode: When Desmond (Henry Ian Cusick) passes an army careers office he stops to look at a poster for 'The Royal Scots' which has some inaccuracies proving it is not a poster that would be found in Britain. Firstly the word 'honor' is spelt 'honour' in Britain. Secondly the small print refers to 'boot camp', which is not a phrase used in the British military. (Desmond is one of my favorite characters, for many reasons--not the least of which is his delectable Scottish accent.)


You can go here to participate in the new version of "Thursday Thirteen"
Posted by Cindy Swanson at 8:41 AM

You missed all the thrills and chills of the new management thing. It was quite the ride.

Fun post. I learned something new. And Kate's hair has me wanting to blow my curly hair (which I never do) today!

I loved the scenes of Sawyer watching Kate. They made me tear up. (I'm a Skater!)

I like Desmond a lot and am glad they've kept him around.

And yes, where are Rose and Bernard? Sawyer is looking for them, too. I wonder what happened...

I noticed that too, Ashley...and to my knowledge, it's never been explained. I'm going to see if I can google anything about it.

Did you write anything after that picture? If so, I didn't notice...sigh...Sawyer.

And yes, I did get a bit sad when Sawyer saw Kate.

Randy Spradlin said...
This comment has been removed by the author.
1:15 PM

Every man wants to be "Sawyer." For every woman it seems wants a Sawyer. Oh, they say they want a nice guy but truth be told, women almost always go for the Sawyer type or so it seems. Or maybe for the Jack type. Someone with loads of money. They say nice guys finish last, might be some truth that old phrase.

I still love "Lost" but the mystery is gone. I only hope they will explain the black smoke monster and I'll be happy. Abrams is a good story teller but he always fizzles at the end. He did that with "Alias" too. (Which I loved. Or was it that I loved Jennifer Garner. Now there's a woman!)

Two things on Charlie and the swimming. One, just a classical goof by the writers or two, he was a coward and didn't want to go after the drowning person.

Even though I think "Lost" has waned a bit, it is still my favorite show. The emotional scenes with Des and Penny always get to me!

I'm a Skater, too! Jack's too Type A for me. I miss Charlie, too! (Spoiler) I was SO, SO, SO hoping the character in the water was Charlie. Color me disappoointed! Sayid's my 2nd favorite character, and I love his storyline this year so far.

Ann-Marie, every time there's a question about who someone is, I always hope against hope that it's Charlie...although I was really glad Jin was alive.

but thanks for visiting my T13

That was very interesting, but I'm afraid "Lost" has been lost on me! I got the first season from Blockbuster to see what all the fuss was about but I found it rather ridiculous, and gave up after 4 or 5 episodes. Still, I know it has been very successful and I wish I owned a percentage of it!

To say I auditioned for the part of Sawyer is not quite accurate. I knew when I went to the audition that I wasn't up for that particular part. They just wanted to see me do something and that's the material they had.

I found Jorge Garcia's blog, Dispatches from the Island, quite a while ago (can't remember how I found out about it, though...) and read it on occasion. (Facebook has taken me away from the world of blogs...) Anyway, it's him! He's posted pics of himself on vacations and all. I really like his blog. How cool is it that he commented on yours?!?!?