OK, so whatever happened to Chris Christian? 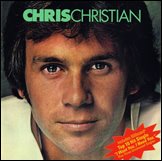 and I answer today's Monday Madness...

My post about Andrae Crouch apparently stirred up a lot of early-CCM memories for some of you. And my mention that when I saw Andrae in concert in Springfield, Missouri in the late 70's, Chris Christian opened for him, got me wondering...so whatever happened to Chris Christian?

Well, I know what he's been up to in fairly recent years, thanks to Wikipedia. According to their article: "In 1992 Christian acquired The Studios at Las Colinas in Irving, Texas. The Studios have been used by film makers to make such films as JFK, RoboCop, Leap of Faith.... Christian also started the LCS Music Group, Inc., which is now the holding company for music companies such as Bug and Bear Music and Home Sweet Home Records. Home Sweet Home is now based in Dallas, Texas."

So...intrepid and curious reporter that I am...I decided to try and call Christian at The Studios at Las Colinas. However, a perky Texas-accented female voice informed me that Christian is no longer with The Studios. She kindly gave me a number where she thought he could be reached, and no one answered that number. I left a message, and may try again later.

Apparently, Chris is involved now with Dallas-based CCEntertainment, which judging from their website, seems to be doing quite well. There are even some pics of Christian that indicate he's still a very nice-looking man. In this pic, Chris is steppin' in some pretty high cotton.

1. What is your favorite framed object in your house?--Not counting pictures of my beautiful children? That would be the picture that I blogged about recently that hangs over my fireplace.

2. If you had a choice of being a carnivore or a herbivore, which one would you be, and why?--Please don't make me choose! I love a good steak, but equally love the salad that goes with it. :)

3. Who do you think should have won the FIFA World Cup? Or, don't you care?--I didn't care...I'm really not into soccer. But I will say that USA Today has the cutest picture today of the Italian team right after their victory. I couldn't find it online, but check it out if you can.

4. What's your feelings on stormy weather?--I love it IF I feel assured that it's not going to do any serious damage. As long as the fireworks are confined to the skies, I love a good whopping bout of thunder and lightning.


5. Do you believe in "time out" chairs?--I never used them when my children were small...they hadn't really come into vogue yet. If they work, though, why not?


6. Have you ever bought or sold anything on Ebay?--Not yet. I keep saying I want to sell my collection of Coca-Cola stuff, but I don't have a digital camera and I understand pics are necessary. My sons have sold stuff, I believe.

I leave you with this clip of Weird Al Yankovic singing "eBay" to the tune of the Backstreet Boys' "That Way."
Posted by Cindy Swanson at 9:47 AM