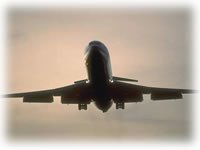 I used to love to fly. And air travel is still definitely my preferred mode of transportation when traversing long distances, like from here to my loved ones in Texas. But I have to assert that flying just isn't fun anymore.

First of all, before you even get on board, there's the hassle of security. Don't get me wrong; I'm glad our government is taking such precautions, and I really wouldn't want it any other way at this point. But I look back fondly on a time when I didn't have to take my shoes off, and "Garrett" was my maiden name, not a word on a wand that was waved over me to make sure I'm not packing something dangerous.

Come to think of it, 9/11 has even changed the way I'm greeted at the airport. I used to love landing in Austin, rushing through that little tunnel to find my loved ones waiting joyously for me with hugs and exclamations of welcome. Now, there's no one waiting for me until I trudge a mile or so through the terminal. Again, I appreciate the precautions...I just wish it didn't have to be that way.

And the delays...the maddening delays. I used to never give a thought to whether my plane would be leaving when my ticket said it would. Now, I steel myself for the delay that seems to happen more often than not. Heaven forbid I enter the airport without a hefty supply of reading material to while away the time.

Then, once you get ON the plane, there's the crowdedness. I'm blissful if I'm not sandwiched between two strangers in an appallingly intimate manner. Often I'm sitting closer to a perfect stranger than I usually sit with my own husband. Excuse me, I don't know you from Adam, but I'm up close and personal with you for the next two and a half hours!

It doesn't help that I struggle with claustropobia when I can't get a zipper unstuck, much less being crammed into a narrow space with no chance of escape. I do a lot of Lamaze relaxation breathing on these flights, just to calm myself down.

And then there's the fear...an emotion I never used to struggle with in my younger flying days. Maybe all young people just think they're invincible? Now, I'm in a constant attitude of prayer while flying. Turbulence upsets me, and terrorism is always a lingering threat, despite said airport security precautions.

And how about the stinginess in modern air travel? You're lucky to get a soft drink and a tiny bag of pretzels. Forget any kind of meal. People used to complain about airplane food, but at least you did get fed.

The lack of food prompts people to bring their own meals on board, which can be a very sloppy and even smelly proposition. I read an article not too long ago decrying the messes air travelers are making with their pizzas and cheeseburgers.

And when the plane finally does land, here's one of my biggest pet peeves. Why don't they let people exit the plane FIRST who DON'T have luggage in the overhead bins? Doesn't that just make sense? Inevitably, I'm paralyzed in my seat or in the aisle while everyone hauls their stuff out of those bins...and seemingly take forever to do so. Would it kill anyone to make a simple announcement: "Passengers without luggage in the overhead bins may now exit the plane"????

I'm not ready to give up air travel. As I said, it's still the quickest, safest and most efficient way to get from Point A to faraway Point B. But, well...it just isn't fun anymore.

Thanks for letting me rant. :)
Posted by Cindy Swanson at 9:45 AM