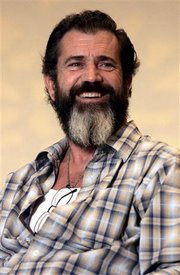 Normally, I tend to like Mel Gibson movies, although I do have my reservations about them, and I certainly wouldn't give them a blanket endorsement. However...

Braveheart is on my list of top 10 movies of all time. I'll admit I close my eyes during the more violent scenes. But it appeals to me on several levels, not the least of which is my intense interest in all things Scottish and Irish. It has everything: romance, heroism, intrigue, conflict, even moments of humor. (Here's a really cool Braveheart fan site.)

I liked The Patriot, although...OK, here's one of my reservations about Gibson's films. They are too bloody. I think he overdoes the blood and gore--all in the interest of historical accuracy, but I guess I don't want to see that much accuracy. Call me squeamish, but it simply offends my sensibilities.

I liked Signs--although, of course, Mel didn't direct that; M. Night Shyamalan did. Critics didn't like the movie, but I thought it was engrossing, and actually included a good faith message.

The Passion of the Christ appealed to me because it is about the Person who is the be-all and end-all of my existence. I have some reservations about it, and it would take a whole 'nother post to go into all that, but overall I thought it was a great film.

One of the things I thought worked about The Passion of the Christ is that it was shot in the original languages. I believe that lent major authenticity to the movie. It was so easy to imagine oneself in the middle of the action as it actually took place in Israel over two thousand years ago.

But now, Gibson is set to film an action thriller set in an ancient Mayan settlement and shot in the Yucatec dialect.

I could be wrong, but right now I have absolutely no interest in seeing this movie. Zero.

I completely disagree with the comment that his latest Mayan Movie Apocolypto was Ooh-kay. It was adreneline pumping from pretty much start to finish. I am Mexican American...maybe..I am not sure, because my families didn't keep track or at least they didn't pass the history onto my last two generations. It was also very insightful on where my people come from and how the fall of the Mayan Empire began.