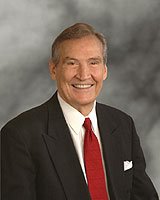 "Whether the discussion is compassion, mental alacrity, sense of humor, prowess in the pulpit, passion for Jesus and for lost sinners, or just faithful encouragement of the brethren, Adrian Rogers brought it all to Southern Baptists. If we Baptists had a Hall of Fame, Dr. Rogers would be enshrined tomorrow."--Paige Patterson, president of Southwestern Baptist Theological Seminary in Fort Worth Texas,

Rogers was a key figure in what was called the Conservative Resurgence, aimed at bringing Southern Baptists back to their historic biblical roots. Rogers recently told the Florida Baptist Witness: "I look back on my life and there are a lot of things that have happened. I have written books, pastored churches, preached on radio and television around the world. But I think the part that God allowed me to have in the turning of the SBC may have the longest-lasting effect and be the most significant."

Dr. Rogers' radio show, Love Worth Finding, airs on Radio 91., and I've often enjoyed catching bits of it as I worked here at the station.

Others blogging about Dr. Rogers today: Mind and Media, Chris Meirose, View from the Pew, Writing Right, Wayward Wretch.
Posted by Cindy Swanson at 7:08 AM