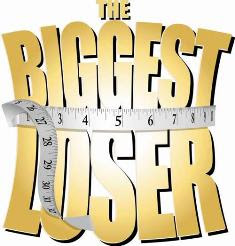 Listen to my Biggest Loser update (less than 3 minutes long), or just read the post below!

Red Team versus Black Team drama continues--with the Red Team being the former "unknowns," who trained in a different location for four weeks, and the Black Team being the team who stayed on the ranch, training with Bob and Jillian.
Am I the only one having a hard time rooting for the red team? Thanks to the show's device, I've never really been able to bond with the red team members. It's not that I dislike them, I still just don't feel like I really know them.
So I find myself pulling for the black team members during challenges, like the train challenge tonight.
I will say this: Last week, I was getting really annoyed with Red Team "leaders" Justin and Rulon. I've always thought they were really heavy-handed in their criticism of their team-mates, and last week Justin especially was on my last nerve.
However, both Justin and Rulon came across as much more likable and sympathetic this week. Rulon had issues, and trainer Cara tried to draw him out, but she was pretty unsuccessful in doing so. I have a sneaking suspicion that if it had been Jillian doing the counseling, SHE would have had Rulon spilling his guts in no time! :)
And then there's Arthur of the black team. I have kind of a like/dislike relationship with Arthur. He often comes across as a bit of a slacker, and he makes really questionable decisions--like sending Jay and Jen over to the red team last week.
But when he lost 20 lbs this week (!!!), I couldn't help but be happy for him, and it was fun to watch the exuberance of his team members and trainers. Again...because I'm a black team fan.
Kudos to Bob and Jillian for helping their team members achieve solid weight losses, despite the fact that losing a challenge meant the team lost the use of the gym for a week
I'm loving the fact that we're starting to see some real changes in these contestants' appearance--I love their transformations!
Since these are basically just my thoughts on the show, you may want to read more of a blow-by-blow account--here's a good site for that.
Meantime, I'd love to read your own thoughts and feedback in my comments section!
Please check out my book blog, Cindy's Book Club, where I'm reviewing Words by Ginny Yttrup!
Posted by Cindy Swanson at 9:02 PM