From the Archives: Who is Gene Kelly? 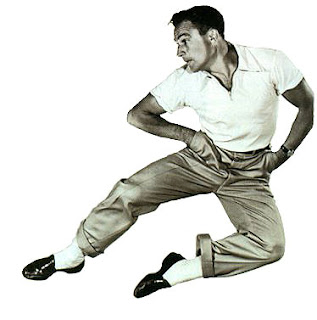 "Gene was among the wonders of the 20th century."-- Stanley Donen

"He could do anything... and did everything."-- Debbie Reynolds
"Gene was one of a kind. He revolutionized dancing in film...[he] was a disciplinarian and a perfectionist... I should know."-- Frank Sinatra
"Young and suave once upon a time, but then the gracefully aged and mature, Gene Kelly is the forever and timeless hero of Metro Goldwyn Meyer (MGM) Studios --one of the greatest leading men in Hollywood and one of the *BEST* there will ever be."--From PrincessMonkey.com
In my Thursday Thirteen about my family, I mentioned that when my husband sings, he sounds like Gene Kelly.
One of the comments came from Ganns: "Who is Gene Kelly?
Ganns, you can be forgiven for not knowing. You're young and you live in the Phillipines.
But let me educate you. Gene Kelly was one of the greatest entertainers of Hollywood's so-called Golden Era.
He wasn't really known for his singing...singing was something all MGM musical stars did in those days while they were dancing. But I happen to love his slightly raspy voice.
My husband's voice is one of the coolest things about him. He has a natural husky/raspy thing going that--well, let's just admit it--is sexy. And I've always thought so, even when I didn't know him very well at all.
When he was in high school and the Godfather movies were just coming out, people thought he sounded a little like Marlon Brando in that famous role.
As a teen-ager, I used to love sitting up to watch what was then called the "Late Show" on TV. Often it would be one of those spectacular MGM musicals, often starring Gene Kelly. I loved them!
So when I first heard my husband sing, I realized quickly--he sounded like Gene Kelly.
So Ganns, just for you...and everybody who remembers those days fondly...I give you Gene Kelly.

Posted by Cindy Swanson at 9:59 AM

Thank for showing that wonderful video of Gene Kelly. He was one of my favorites for sure.

Did you know that he was sick with the flu when he did that performance? The show's gotta go on!

I love Gene Kelly! I am slowly introducing Maddie to old movies. She has seen The King and I and Seven Brides for Seven Brothers so far!!