Brisco County Jr, where have you been all my life?!? 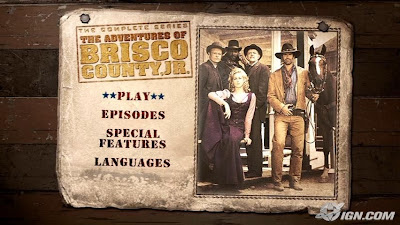 My son Jonathan has been instrumental in getting my husband and me hooked on several TV series--not the least of which, a little series called "Lost."

Most recently, though, Jonathan gifted my husband with an entire series on DVD. It's The Adventures of Brisco County Jr, and I'm loving it!

(Oh, and guess what? The series' co-producer and writer just happens to be Carlton Cuse, one-half of the "Darlton" team [with Damon Lindelof] responsible for "Lost.")

"In the closing days of the 19th Century, the West has become nearly civilized, especially with the capture of the infamous Bly Gang. However, the evil John Bly manages to turn the tables on his captor, the famed marshal Brisco County Sr., and murders the lawman in making his escape. A group of wealthy robber barons hires the marshal's son, Harvard-educated lawyer Brisco Country Jr. (Bruce Campbell), to pursue Bly and his gang and bring them to justice.

Joining the fun is the robber baron's mouthpiece, Socrates Poole (Christian Clemonson), sent along to keep an eye on County. Meanwhile, the notorious bounty hunter Lord Bowler (Julius Carry) vows to beat Brisco to the reward. The three join forces, aided at times by a mysterious orb, a sassy saloon singer (Kelly Rutherford), Comet the wonder horse, and an ever-changing assortment of oddballs, in hunting down the members of Bly's gang.

And hey--that's just the pilot!" 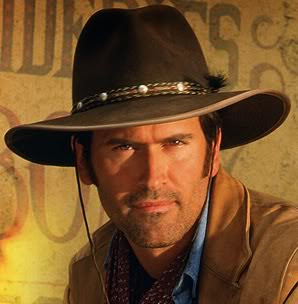 You'll recognize Bruce Campbell, who plays Brisco, from Burn Notice--although, hello. Bruce was quite a looker in his younger years, I must say.

SO many things I love about this show, it's hard to think of them all. The tongue-in-cheek humor ("You hit the sheriff!" "Yeah, but I didn't hit the deputy."), terrific writing and colorful characters are way up there.

I love that John Astin plays a recurring character, as the wacky professor.

I even like the "sassy saloon singer," Dixie Cousins, played by Kelly Rutherford. (I love her speaking voice--it reminds me of the voices of Hollywood-golden-era actresses like Judy Garland and others.)

Julius Carry is awesome as "Brisco's faithful companion" (a phrase that infuriates him!) Lord Bowler, the bounty hunter.

Billy Drago gloriously chews up the scenery as the villain, John Bly. John is so wonderfully over-the-top bad, you can't help but love it.

I never saw one single episode of this show when it originally aired in 1993, lasting only one season. But I'm thoroughly enjoying it now. All the more reason that I'll be sad when I've completed all the episodes on DVD.
Posted by Cindy Swanson at 12:35 PM

I loved it back then - and Bruce has aged fairly well. Too bad some of those quirky shows didn't gain "fame" quickly enough, or a large enough audience share (according to the network) to be continued. Same thing happened to Firefly - my favorite series ever (Nathan Fillion from Castle, Adam Baldwin from Chuck, Morena Baccarin from V, Summer Glau from the Terminator series, Ron Glass from the old Barney Miller - excellent cast if you've not seen it!)

Thanks for your comments about my Hodgepodge entry. I have no idea who any of these folks are that you have mentioned in your blog. I am very challenged when it comes to TV Shows. I just don't watch much outside of the news type shows except for DWTS and American Idol. :o)

Guess we both grew up in that era where a preachers daughter better not get caught dancing. :o)