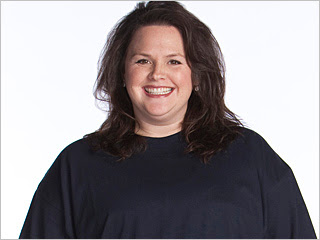 Terrible Tracey--but I still can't detest her as much as I did Vicky!

I can't believe Tracey lived to fight--I mean, lived to experience unbelievable luck--another week! Even more amazing: her husband, as portrayed on a "video from home" prize, seems like a really cool guy! Is Tracey not as crazy and awful as she seems? Hmmm.

One thing's for sure: being separated from their partners is not the worst thing in the world for the contestants, although it seemed like a funeral when they were being ripped apart.

I think one result of being cut off from their families and the rest of the world is that they become almost obsessively attached to their partners. I think even by the end of last night's episode, they were realizing that they could succeed without their erstwhile partners constantly at their side.

Also, being assigned to Jillian instead of Bob is NOT a fate worse than death. Jillian consistently grooms winners on that show. Could I train with her? Absolutely NOT...look up "wimp" in the dictionary, and there's a picture of me.

However, my Gulf War veteran marine and ex-cop brother says he would LOVE to have Jillian for his trainer. :) From someone who has experienced near-torture in the name of physical fitness, that's pretty high praise.

I'm not thrilled about the black-versus-blue, Bob's team versus Jillian's team starting all over again, because inevitably, that's when "game play" shifts into high gear. And quite frankly, game play is NOT what I love about this show...it's determination, motivation, inspiration--watching people who had no discipline and no goals transform into physically fit, well-adjusted people.

But you know what? I firmly believe "Biggest Loser" is one of the best things on TV right now.
Posted by Cindy Swanson at 7:16 AM

Biggest Loser is the only show I look forward to and watch faithfully every week.

I still cannot believe that Liz didn't vote Tracey off! She was so strong in saying that first chance she got, boom, Tracey's name was going on that card.

Let's see what happens this week!