Stuff to tell you! 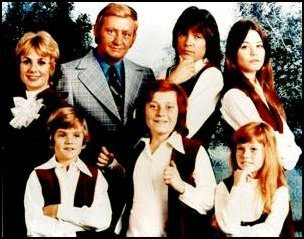 A veritable potpourri of newsy or just plain interesting links...

--Just how far has television come in its non-family-friendliness? Check out this quote from Dave Madden, who used to play Reuben Kincaid on The Partridge Family:

"The kinds of things they do in Two and a Half Men could never, ever, ever have been done in 1970. If they did that, and it actually got on the air—which it wouldn't—we'd be out of a job the next day. I remember once on The Partridge Family, Danny came home and said that something bad had happened to him at school. My line was, 'Boy, that's really rotten, Danny.' Well, they came in from the network and said, 'Change rotten to awful. Rotten is too strong a word to use in prime time.'"

From Plugged In Online Culture Clips.

--The top 10 American Idol contestants kick off their tour tonight.

--Lost Boy: The Documentary, a film based on Harvest Christian Fellowship Pastor and Harvest Crusades Founder Greg Laurie's new autobiography, will make its national television debut on Daystar Television Network July 3 and 4.(I recently heard a radio interview with Greg Laurie about this, and it was riveting.)

--The documentary The Case for Faith, based on the book of the same name by Lee Strobel, will soon be available on DVD.

--Ben Stein has been honored by the Entertainment Merchants Association with their Freedom of Expression Award for his expositions of his economic and political beliefs... as evidenced in his movie Expelled: No Intelligence Allowed.

--From USA Today: 12 shows (some classics) that you can watch on the web.

Have a great Tuesday, everyone!
Posted by Cindy Swanson at 9:58 AM

i hope that greg laurie's "lost boys" will be on our tv too ... we are reading one of his books outloud, "the God of the second chance" and in it he shares how is step-dad came to the Lord - powerful story ...

also thanks for the heads up re the book that pays tribute to phyllis whitney, but in a christian style of writing ... i'll have to look for it in the library, but first write down the name!!! (see i forgot the name already, but i think bayou was in it??!!! my memory!)

blessings on your week and your 4th of july coming up!

I'll have to check out the USA stuff. And Prime Time has certainly become family un-friendly. Even the TV guide has unacceptable programming after 9 PM.

What irks me about today's tv is that most of the "male" role models are treated as being inept or stupid. No, I'm not against confident wives. But, the father figure of old has definitely been replaced with ones that are being portrayed as morons. God definitely loves men and women the same. However, the father role has taken a back seat which is sad.