It's a little early for American Idol talk, but... 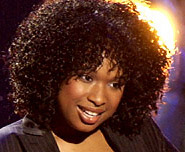 ...it's hey, it's Monday. And I'm in TV limbo, because while "Lost" is on hiatus and "American Idol" is still waiting in the wings, there is hardly anything I care to watch on television.

Anyone who watched Season 3 has to remember the travesty that occurred when Jennifer was voted off. Some blamed it on a massive power outage in Hudson's native Chicago; some cited it as one of the reasons AI needs to look into its voting procedures.

All during that season, I had been rooting for Hudson. She has, quite simply, an amazing voice. In this day when popular music seems to be mostly people talking, or singing in breathy whispers, Hudson is a throwback to an age when people really sang. And I mean, really sang.

She was voted off way too soon, appallingly too soon, and Fantasia ended up winning that season.

Fast forward to December 2006. Not only did Jennifer snag a role in the movie Dreamgirls, based on the Broadway hit of the same name--well, now early critical buzz is that Jennifer Hudson OWNS the movie. That she outshines Beyonce, the nominal star of the movie--and even that she could be nominated for an Oscar as Best Supporting Actress.

Wow, triumph has to be really sweet for Jennifer Hudson right now.

By the way, you may know that Dreamgirls is based on the story of the Supremes, the classic 60's Motown girl group. In real life, Diana Ross was put out in front of Florence Ballard as lead singer of the group, because Motown producer Berry Gordy thought her high, light voice would have better cross-over appeal than Florence's powerful, soulful voice.

Diana zoomed to super-stardom while Florence ended up drinking too much, getting fired from the group, and dying in poverty of a heart attack in her early thirties.

The lilting tunes of the Supremes never fail to take me back to my childhood and remind me of my older sister Bev. It's hard to imagine what the Supremes would have sounded like with Florence Ballard at the helm, or whether Flo's life would have had a happier ending. But things are looking really good right now for the singer/actress who plays the woman based on her.