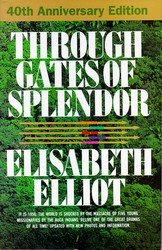 It seems I can't resist a book list, and I found this one thanks to Sherry's Semicolon blog.

You can go here to see the entire list of Christianity Today's Top 50 Books That Shaped Evangelicals.

While I won't list them all, I will list the ones I've read and the ones I really want/need to read. Here goes:

42.The Purpose-Driven Life
Rick Warren--Yep, read it when it first came out and before I was made aware that a lot of people have problems with it and Warren's philosophies.

40.Darwin on Trial
Phillip E. Johnson--Have not read it; need/want to. By the way, this is the Phillip Johnson that Phil Johnson of Pyromaniacs is always having to explain that he is not.

39.Desiring God
John Piper--Haven't read it. I know, I know...get away from me with the wet noodles! I need/want to read it.

37.God's Smuggler
Brother Andrew with John and Elizabeth Sherrill--Read it as a teen; loved it. Along with another persecuted-church-themed book that's not listed here, but had a huge impact on me: Sergei Kourdakov's The Persecutor.

36.Left Behind
Tim LaHaye and Jerry B. Jenkins--Read this one, and maybe the second and third one, and then dropped out. It struck me as a bit ludicrous that they were dragging the end times out so much.

34.This Present Darkness
Frank E. Peretti--Read it, really liked it...but I must confess I was looking for demons around every corner for a while.

33.The Late Great Planet Earth
Hal Lindsey with C. C. Carlson--I think I kind of skimmed this one. But it was definitely in my dad's (a Baptist pastor) circa-70's library.

32.The Cross and the Switchblade
David Wilkerson with John and Elizabeth Sherrill--Yep, read it as a teen.

29.Dare to Discipline
James Dobson--Read it. Some good principles.
28.The Act of Marriage
Tim and Beverly LaHaye--Oh, yeah. Definitely, as an engaged young woman in 1978. It was a must-have for all engaged couples in the Bible college I attended. Although Tim and Bev didn't encouraged unmarrieds to read it, because of the temptation to act on the knowledge too soon. :)

27.Christy
Catherine Marshall--Read it, loved it--in fact, I'd like to get ahold of a copy and read it again. At the time I read it, as a young girl, I was a little disappointed in the man she ended up with. Now I think I would find her choice spot on.

20.A Wrinkle In Time
Madeleine L'Engle--Haven't read it, need to if only because it's been a major impact on so many people.

13.Evidence That Demands a Verdict
Josh McDowell--Have read parts of it.

9.Through Gates of Splendor
Elisabeth Elliot--Out of all the books on the list, this one probably impacted me the most. I read it as a Bible college student when I was part of a readers' theater based on the book, and the entire experience fueled my desire to make my life count for Christ. Also hugely influential, the follow-up: Shadow of the Almighty.

5.Knowing God
J. I. Packer--As with Desiring God, am embarrassed that I haven't read this one. I'm an idiot.

4.The God Who Is There
Francis A. Schaeffer--Want/need to read this one. Have heard good things about it for years.

1.Prayer: Conversing With God
Rosalind Rinker--Should read this one.

Check out the list and see how many you've read. And if you can recommend any of the others to me, do let me know!
Posted by Cindy Swanson at 10:40 AM