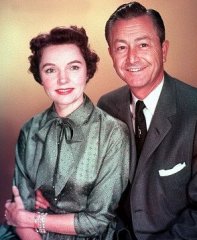 I'd like to see a TV dad who knows best, at least some of the time

I felt a touch of sadness when I heard that actress Jane Wyatt passed away at the age of 96. To be honest, I don't think I ever watched an entire episode of Father Knows Best. It was before my time, and I don't think it ever gained the kind of re-run ubiquity that some other old TV shows have enjoyed.

Obviously, Wyatt lived a long life, and we can hope that she was ready to meet her maker when she left this earth on October 20th. So why my sadness?

Well, Wyatt's passing--although her TV career ended years ago--represents just one more toll in the continuing death knell of any kind of decent family viewing on network television. Along with any kind of viewing that gives a positive portrayal of a traditional nuclear family.

The "war on fathers"?

"Father Knows Best" has been relentlessly made fun of and criticized for representing a picture of the American family that was unrealistic at best and harmful at worst--harmful, in the eyes of some, because it perpetuated a stereotype that few families could ever hope to live up to.

But Wyatt herself defended the show in a 1966 interview: "We tried to preserve the tradition that every show had something to say. The children were complicated personally, not just kids. We weren't just five Pollyannas."

I, for one, would find it refreshing if there were more TV shows that actually showed a dad that wasn't a complete loser or a bumbling idiot. In this WorldNetDaily article, David Kupelian recently wrote about the war on fathers: "Today, more often than not, television portrays husbands as bumbling losers or contemptible, self-absorbed egomaniacs. Whether in dramas, comedies or commercials, the patriarchy is dead, at least on TV where men are fools – unless of course they're gay."

Kupelian ends his article this way: "When we break the bond between fathers and their children, we're breaking the bond between God the Father and our nation. When we restore that connection, our society will be healed. It's as simple as that.

"That's God's way. Listen to Him. He's your Father, and believe me, He knows best."

Hmm. I don't think I could end my post any better than that.
Posted by Cindy Swanson at 9:44 AM