My favorite Christmas presents as a child...

I was always a bookworm as a child, and my favorite gifts were books. Oh, I played with Barbie dolls and baby dolls, and spent plenty of time outdoors (in those days kids actually PLAYED OUTSIDE), but other than that, you could find me curled up with a book--sometimes to the annoyance of my friends and family.

When I was a little girl, my parents were missionaries to Beirut, Lebanon. There were many bookstores containing books in English, and I can remember exactly how they smelled and how I was in paradise when inside one.

Christmas wasn't Christmas if I didn't get several books. They were very inexpensive in Beirut, so it was no problem for my parents to obtain nice, hardcover books.

I went to a British school for two years, and read "Jane Eyre" at the age of eight or nine. It remains one of my favorite books of all time other than the Bible...probably my very favorite.

I remember one Christmas, when I was nine or ten, I got several classics, including "Pride and Prejudice" by Jane Austen, "Gulliver's Travels" by Jonathan Swift, and "Villette" by Charlotte Bronte. But probably one of my very favorites was a large anthology of Enid Blyton.

Enid Blyton was a British writer who was very prolific. I loved everything she wrote, including a series she did about a girl's boarding school called "Malory Towers."

The anthology was a huge,almost coffee-table size book full of her stories. I loved that book and wish I knew where it was today. (By the way, I still have many of the hardcover books my parents gave me in those days, and re-read them every now and then...even the ones that were for children.) 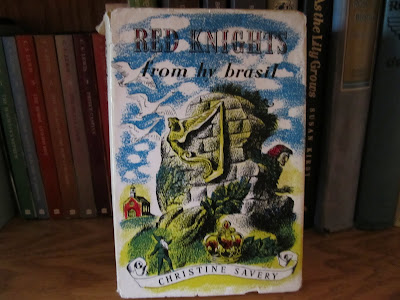 (I blogged last year about my delight in finding one of my childhood favorites, "Red Knights from Hy Brasil," by Christine Savery.)

It was during this era that I also fell in love with Noel Streatfield's "shoes" books, C.S.Lewis' Chronicles of Narnia, and anything by Louisa May Alcott.


Beirut also had a Christian bookstore in those days, owned by a British missionary society. They had a great selection of books from Moody Press (anybody remember the Danny Orlis series?) as well as many by British authors. Again, I still have many of those books.

Yes...my favorite Christmas presents were definitely BOOKS. To this day a new book, especially a new fiction book, is like a treasure trove to me...an invitation to step out of my reality for a while and enjoy a different world.

And today I ordered another of my childhood favorites... 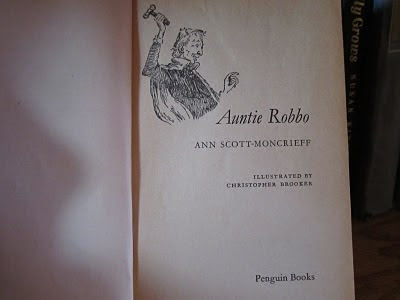 It's "Auntie Robbo," by Ann Scott-Moncrieff.

I've probably read this book at least once a year throughout my entire life. The problem is, my copy--yes, the paperback one my parents bought for me circa 1966--is coverless and missing the last couple of pages of the book.

The engaging, quirkily humorous story is about an eighty-something Scottish lady who is highly eccentric and stubbornly independent, and who totally refuses to act her age.

Seen through the eyes of her great-nephew Hector, who is a boy of eight or nine, Auntie Robbo is a highly admirable and fascinating character. The two live a carefree and rather undisciplined life in the Scottish hills, and Hector's perfectly happy with the status quo.

When the second wife of Hector's late father shows up to claim him as her own--Hector has never met this obnoxiously annoying lady until now--Auntie Robbo and Hector go on the run. Their adventures make for delightfully absorbing reading, even at my advanced age.

So, on a whim today I decided to try to find the book online. Sure enough, it was available on several used and rare book sites, but I ended up getting the best deal on amazon.com. (yes, they do sell used books.)

I can't wait to get my new copy of "Auntie Robbo." Just as "Red Knights" was, this will be a wonderful gift for myself.

And after all, books are still some of my very favorite presents.

So, what were your favorite childhood books? Do you own copies of them today? Do you share them with your own children? Tell me about it in my comments section.

Posted by Cindy Swanson at 8:46 AM

Hi Cindy,
I feel just the same way about Auntie Robbo. It's something I just happened to pick up from my school library and it turned out to be such a hoot. Just a few years back, my sister (who's a big fan of the book) ordered it online for an exorbitant amount, but it's so worth it. It's been a while since I read it, so fingers crossed I like it just as much this time around. And, you read Enid Blyton! That's another of my favourites - all the way from Malory Towers, St Clare's and Naughtiest Girl series to the Famous Five and Secret series. However, the ones I continue to enjoy thoroughly as an adult are her bedtime stories. They're so timeless and profound without being preachy.

i also love auntie Robbo. it was one of my favourite books as a child, I read it again and again. auntie Robbo is a great comic creation.