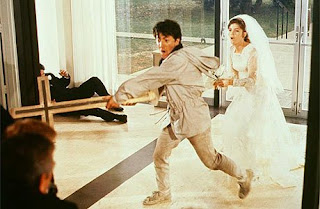 NOTE: OK, I've re-posted this thing more than once, but it's just so genius! Anyway, enjoy (again?)
Oh, and feel free to add more if you think of any!
********
Several months ago, Men’s Health came up with a list of things that happen all the time on screen, but never in real life: “I’ve never…” At the time, I was still Darren Marlar's co-host on 101qfl, and we had fun talking about the list, and even adding a few of our own.
I blogged about it at the time, but hey, it's worth a repeat! :)
Here it is...stuff I've never done that's always done in the movies...(mostly written from the viewpoint of a man, by the way)
• Bumped my head and gotten amnesia.
• Left the water on in the bathroom sink long enough to flood the whole house.
• Been chased through the forest, tripped, and twisted my ankle, compromising my escape, but I still say, “Don’t stop. Go on without me.”
• Been stuck in an elevator with a woman I hated, but by the time the elevator was repaired, we were passionately making out. (*revised for family friendliness :))
• Been stuck in an elevator with a pregnant woman.
• Said, “Open this door or I’m breaking it down.”
• Found myself on top of a moving train.
• Picked a lock with a credit card.
• Said, “Don’t do it, man. Just give me the gun.”
• Been to a wedding where someone stood up and objected.
• Collapsed onto my car horn.
• Seen a bunch of homeless guys standing around a flaming trash can, singing doo-wop and wearing gloves with the fingers cut off.
• Dialed a “555″ phone number.
• Closed my medicine-cabinet door and seen someone in the mirror who wasn’t there 3 seconds ago.
Added by Darren and me:
• Ran into a church where the girl I loved was about to get married to someone else, but upon seeing me stopped the wedding and professed her love to me (and either ran out the door with me, or WE got married instead...and the former groom admitted he was in love with one of the bridesmaids.)
• Rushed to the airport to stop the woman I just realized I love from leaving, and as I get to the gate, I see her plane pulling away, and then feel empty because I think that my best chance at love is now gone, but, as I turn away, she’s standing there because she decided at the last minute not to get on the plane because she realized that she loves me too and was hoping I would come to the airport to get her.
and...(added by Cindy!)
Woken up in the morning, after a long night of sleeping, with a full face of make-up and breath fresh enough to kiss someone.
Got any to add? :)
Posted by Cindy Swanson at 9:39 AM

I totally relate to the last one! It always bugs me in movies and on "reality" shows when the girls wake up with a full face of PERFECT makeup.
:)

"Going for weeks, months or even years without ever having to use the bathroom."

or for the ladies:

"Waking up after a good night's sleep with perfect hair and make up."

Yep Rodney, the bathroom one is a great one--can you say Jack Bauer? :)