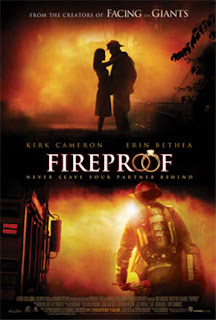 The humanistic religious worldview of Hollywood elites and their intense hatred for Christianity and the value system which it embodies has created a rift in American culture and profoundly damaged the American family. We intend to respond, not by cursing the darkness, but by lighting candles. Building a community of independent Christian filmmakers is one such candle.--Doug Phillips, President, Vision Forum Ministries

More than 2000 Christian filmmakers were expected to attend this week's San Antonio Independent Christian Film Festival, going on now in San Antonio. Dean Jones and Kirk Cameron are on hand at the festival.


Fireproof (which earned more than 33 million dollars at the box office) and Ben Stein's Expelled are among the films for the 101-thousand dollar grand prize awarded to the best feature film.

Have you seen "Fireproof"? I haven't yet, and would love to know what you thought. Give me your mini-review in my comments section, please!

Meantime, the 17th Annual Movieguide® Faith & Values Awards Gala is set for February 11, 2009 in Beverly Hills, CA. The two winners of the Most Inspiring Movie of 2008 and the Most Inspiring Television Program of 2008 will each be awarded a total of $100,000 in prize money at the event.

Last year's winners were “Amazing Grace” and Hallmark Hall of Fame’s “The Valley of Light” on CBS.

Movieguide founder and spokesman Dr. Ted Baehr has come out with a list of the Top 5 Cultural Events of 2008. According to him, they include:

2. The decline in attendance at the movie box office in 2008, where admissions dropped 5%.

3. The success of clean movies, especially animated movies, at the box office, including such hits as “Wall-E,” “Kung Fu Panda,” Madagascar: Escape to Africa,” “Horton Hears a Who,” “Journey to the Center of the Earth,” “Bolt,” “Beverly Hills Chihuahua,” and “High School Musical 3.”

4. Movieguide® and the Concerned Women for America’s successful campaign to get the controversial child rape movie, “Hounddog,” pulled from theaters.

5. The cultural move toward the Internet, including teenagers and young adults downloading movies from the Internet to watch on their laptops instead of in theaters or on television.
Posted by Cindy Swanson at 10:18 AM

My husband and I really liked FIREPROOF. We thought there was something there for marriages regardless of what stage they are at. Our adult kids thought some of the acting was just a little hokey, but they still liked the movie and its message.