OK, I know Blago is innocent until proven guilty, but I'm thinking... 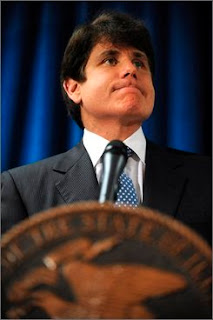 ...about what makes people in high places take risky chances?

And I thought our biggest news story today was the winter weather.

While these are only charges and haven't been proven (yada yada yada), I can't help but wonder WHAT people in high positions--whether it be elected officials, pastors, evangelists or priests--are possibly thinking when they partipate in wrongdoing. They are taking enormous risks when they do so. How do they possibly imagine they can get away with it?

And yet it happens over and over again.

Why? I believe one explanation is summed up in the word hubris:

In its modern usage, hubris denotes overconfident pride and arrogance; it is often associated with a lack of humility, not always with the lack of knowledge. An accusation of hubris often implies that suffering or punishment will follow, similar to the occasional pairing of hubris and nemesis in the Greek world. The proverb "pride goes before a fall" is thought to sum up the modern definition of hubris.--Wikipedia

This from an article titled "Why Good Leaders Do Bad Things" (from the Graziadio Business Report, which--perhaps ironically--is put out by Blagojevich's alma mater, Pepperdine University):

"Leaders with strong virtuous values are more likely to act ethically than are leaders who are operating with a weak or non-existent value system. One set of values that seems to be universally accepted includes wisdom, self-control, justice, transcendence, kindness, and courage. [my emphasis]...

"When faced with challenging decisions, leaders who have not internalized a value system that includes these values will probably respond with more variability than will one who has such a system. It is primarily in the situation in which the leader does not have an internalized value system that mental gymnastics or mind games may cause an otherwise good person to make unethical decisions."

Thomas Macauley wrote: "The measure of a man’s real character is what he would do if he would never be found out."

Whatever happens in the case of Governor Rod Blagojevich, I think I speak for thousands of Illinoisans who want a break from even the hint of the taint of corruption. Oh, for leaders--whether it be in politics, business or religion--who have true integrity!

The man of integrity walks securely, but he who takes crooked paths will be found out.--Proverbs 10:9

Posted by Cindy Swanson at 8:30 AM

Yes, I was with you when we thought the weather would be the talk of today, but while listening to WGN this morning it was about our Governor.

Whoever we are the Bible is truly the Word of God. (It was sad to hear our President Bush said on Nightline that he did not think the Bible could be taken literally) And just that one verse alone: "Be sure you sin will find you out." Should all make us want to behave at all times.

This is just a side comment about our President. I'm not saying he is not a Christian but perhaps he needs alot of grounding in the things of the Bible. Perhaps you could check out the interview and give you imput into that interview.

I think I understand what you are saying, and if so in my mind this relates... but maybe not.
My sweet husband and I lead a simple life. He works an 8-5. We don't do debt besides a small mortgage which we hope to pay off early. We were just talking last night about how we are "low risk" people. But there are SO many "high risk" people who achieve greatness. The chance to run for public office; the stepping out in faith of a pastor to lead a big church; the businessman who makes his millions by taking a "chance" on a business. The "high risk" people have a place in our society-- and it's important that they do... but like you said, when these "high riskers" have success it could easily feed hubris, which would lead them to other risky behaviors-- ones that aren't "succeed vs. fail" but more like "reckless sin vs. straight and narrow." Straight and narrow is more my "low risk" style. :-) But then it could be argued that I haven't "achieved" much in my life either! (That's debatable-- I have 6 kids!)
Anyway, Not sure I added anything to your thoughts but it's interesting you bring this up after we were talking about it.
Have a great day!

It is always shocking when a leader is acused of horrible crimes or sins. We as humans longing for a better example to look up to, tend to elevate leaders more than we ought. I remember a certain Christian college I attended 20 years ago just over the border from where you live and how the people elevated the pastor/founder to rock star status. How horrible it was when he was accused of major wrong doing. Trust was betrayed on both sides. When you fling mud, some of it is going to stick. Often there is at least an element of truth to the mud slung. The real test of integrity is what happens to those under the leader when such failure occurs. You will have three groups: 1. The Indifferent 2. Blind loyal and 3. Those who take action to protect the people under the failed leader.

The people have the capacity to restore the integrity or continue to warp it by their reactions or lack of reactions.

And people wonder why I'm not into politics! :-)

Hey, Cindy, I tagged you today! Check out my blog for details, and only participate if it's convenient! :-)

I think there are a whole plethora of people who are out to destroy our system of government by any means necessary, all for the purpose of remaking America in their own socialist/utopian image.

I have to remember what John Adams said. Our system was designed for a moral people. It won't work with any other. We're finding that out in spades.