My vote was for Ed--as "Biggest Loser" winds up... 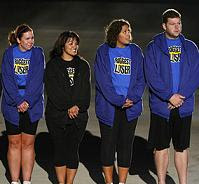 As you know if you read this blog at all, one of my favorite TV shows--one of the few shows I watch regularly--really tried my patience this season.

"The Biggest Loser" has been a source of real inspiration in my own fitness journey. This season, it was mostly about game-playing, manipulation, and really unpleasant people getting their way.

And yes, Vicky's ultimate game-playing plan succeeded. Her alliance with Ed and Heba did result in them, as blue team members, making it all the way to the final four, and could result in her winning the big 250-thousand dollar prize at next week's finale.

I hope not. I've like Michelle (and her mom, Renee, who left the show last week) from the very beginning. Their pleasant personalities and obvious niceness, along with their hard work, determination and healthy competitiveness, are what the show's all about for me.

I think that what has grated on my nerves the most is the fact that Vicky's plan has worked almost like clockwork, with only a few setbacks (notably when Amy C had the courage to vote off Vicky's husband Brady, and the fact that Michelle and Renee of the black team just kept working extremely hard and losing weight.)

Unpleasant and annoying though she is, Vicky is a hard worker and a brilliant game-player. I have to give her that. But that's NOT why I watch "The Biggest Loser."

Last night, blue team/alliance members Ed and Heba, who are married to each other, fell below the yellow line that puts you in danger of elimination. Now it's up to "America" to vote: who will be the third person in the finale, alongside Michelle and Vicky?

Ed made a plea for us to vote for Heba. He wants her to have the chance to be in the finale.

Well, I voted for Ed.

Why? Honestly, I'm not trying to be spiteful. It's just that after watching Heba and Vicky scheme and manipulate week after week to play the game, I just want something NOT to go their way.

This article by Valerie Phillips does a good job of summing up why the show needs to shed the negative aspects that it seems to have embraced this season.

Phillips tells quotes her sister-in-law, who has lost 50 pounds with the help of the show:

"I was so excited for this season to begin but have been so disappointed at the mean-spirited people they have chosen, especially Vicky, who has such hateful thoughts and actions toward many of the other contestants." she said.

Amen to that.
Posted by Cindy Swanson at 9:28 AM