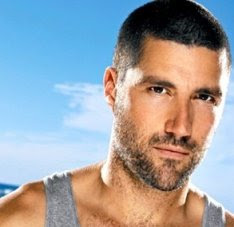 This is a Thursday Thirteen "re-run," but I think it's worth re-visiting!

1. Jorge Garcia (Hurley) was the first person cast for the series.

2. In the original description for Kate (Evangeline Lilly), she was a slightly older woman separated from her husband, who went to the bathroom in the tail-section of the plane. However, that idea ended up being used for the character Rose.

3. Josh Holloway was trying to cover up his Southern accent while he was shooting several of his first scenes in the first season. It wasn't until director J.J. Abrams told him that the reason they cast him was BECAUSE of his accent that Holloway changed it. There are still some scenes left in the pilot where Holloway doesn't use his Southern accent.

4. Jorge Garcia, Matthew Fox, and Dominic Monaghan all auditioned originally for the part of Sawyer as the other characters had not been developed at the time.

5. Michael Keaton was considered for the part of Jack, but turned it down. Had he accepted, he would have been killed off in the pilot episode.

6. Charlie (who sadly died in last season's finale) was in a band called Drive Shaft. Their only hit was called "You All Everybody". That song can be heard in the background of an episode of Alias, another show created by JJ Abrams.

9. There is a common misconception that since Claire (Emilie de Ravin) is eight months pregnant and in her third trimester, the airlines wouldn't have allowed her to fly. While airlines may not necessarily recommend flying when eight months pregnant, they cannot and will not prohibit a pregnant woman from taking a flight if she really wants or needs to.

10. Evangeline Lilly (who plays Kate) and Dominic Monaghan (who plays Charlie) were engaged to be married to each other in real life until just recently.

11. Naveen Andrews' character, Sayid, is Iraqi; but in real life Andrews is of British and Indian origin.

12. A goof in last season's Desmond-centric "time-travel" episode: When Desmond (Henry Ian Cusick)passes an army careers office he stops to look at a poster for 'The Royal Scots' which has some inaccuracies proving it is not a poster that would be found in Britain. Firstly the word 'honor' is spelt 'honour' in Britain. Secondly the small print refers to 'boot camp', which is not a phrase used in the British military.

Posted by Cindy Swanson at 6:08 AM

Still refusing to see it. Posts like this tell me I have to. Will rent from the beginning and make a whole weekend out of it!

Oh dear... only two commentors so far, and neither one of us has seen it! How sad! I don't watch ANY television though... so it's not simply a "Lost" thing with me! Hubby LOVES that show though! I bet he knew all this stuff! Thanks for stopping by today!

I haven't seen it. Happy TT.