How you can order Evie's new Christmas music! 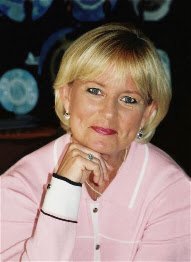 Yesterday, I had the chance to interview beloved Christian singer Evie Tornquist Karlsson.

As I told Evie, one of the main searches that brings people to my blog at this time of year is for info on Evie and/or her Christmas classic, "Come On Ring Those Bells." This is the third time I've interviewed Evie in recent years, and I'm starting to feel like we're old friends!

Evie even sang "Happy Birthday" to me...is that cool or what?

By the way, she's keeping busy with concerts, both solo and with Rebecca St. James. And she and her husband Pelle are actively involved with the Back to Jerusalem project, and have even made recent trips to China to encourage believers there.

A few years ago in an interview, Evie told me that she had gone back into the studio to re-record some of her Christmas songs and add some new ones. These CD's are usually sold at Evie's personal appearances, but until now, there's been no way for you Evie fans who read this blog to get ahold of the CD's.

Now, Evie has given me an address to which you can write and order the CD. Unfortunately, I have no pricing information, but at least you can send your inquiries here:

You can go here to hear the entire interview, which is about 16 minutes long.
Posted by Cindy Swanson at 8:48 AM

Evie is my favorite singer. I still recall the very 1st time I ever heard of and saw her. I turned on the tv and a young lady was running through a field of tall grass singing as the chorus to a song, "PRAISE THE LORD, HE NEVER CHANGES". As I stayed tune hoping to hear her name, I found I had just tuned in to a Billy Graham Crusade and the announcer said her name was Evie. That moment she had captured my heart and that song stayed with me. How I wish VCR were out then and I owned one. I have so much wanted to view that over and over again as more of Evie's TV apperances. Within 6 months after the one TV apperance we had an assembly at my high school and there was to be a surprise guest to sing before the planned assembly. Our Bible School President had somehow gotten Evie to sing at my high school Eastern Alamance High while she was here with the Leighton Ford Crusade. I recall being in total shock. The student body LOVED HER. I recall running back stage of the auditorium exit to meet her, but I was too late. She had left. I was disappointed to say the least. My typing teacher, Mrs. Newman proof read a letter that I written to Evie. Evie responded to my letter and in 1978 when Evie was in Concert in Raleigh, NC my Bible School Teacher the late Mrs. Hightower took me and the whole Bible class to the concert. At intermission I was fortunate enough to meet Evie and get her autograph.
I proudly own all of Evie's American releases and a couple of Swedish/Norweigen releases, however am very upset that more of her music was not released on compact disc. Songs like "Be Still" "A Picture Of You" "Day by Day" "I Need Thee/I Surrender All" medley "This Live" "You Have Everything In Your Hands" and more need to be converted to compact disc for better sound quality and our younger audience whom will never own a record player as the Lp's are out of print. Evie's music should always be in print. She's the QUEEN OF CONTEMPORARY CHRISTIAN MUSIC....the pint-sized powerhouse.... and is the absolute best of them all...even the ones being marketed today. I admire her for taking time off to raise her children and be a pastor's wife. But, I sorely miss her. May God ever continue to bless her in all her endeavors. (I love you Evie!!!!) a long time fan from North Carolina
PS HOW ABOUT A EVIE IN CONCERT ON DVD!!! IT WOULD BE NICE IF THE BILLY GRAHAM CRUSADE PRODUCTION WOULD RELEASE SOME OF THE FOOTAGE OF YOUR APPERANCES TO INSERT IN THE CONCERT. WOW THAT WOULD BE GREAT SEEING YOU SO YOUNG SINGING SOME OF THE SONGS VERSES HOW YOU'VE GRACEFULLY AGED. YOU'RE STILL JUST AS LOVELY WITH THOSE DIMPLES AND BIG SMILE. PELLE, INGLE AND WILLIE GAVE YOU A GEM.
KRIS AND JENNY, YOU HAVE A WONDERFUL MOM!
KARLSSON FAMILY: MAY GOD EVER CONTINUE TO BLESS YOU.

Thank you Cindy for this blog and thank you for not letting us loose site of Evie. This is the 1st blog I've ever written, but when I saw the opportunity to say something about Evie I could not resist.

Dear Jody, I have been a huge fan of Evie ever since I saw her in the 1970's, a few months after I had been born again. You can find a few videos of her on www.youtube.com
Enjoy...Art

I wrote to the above address and received the following reply via email (I included my email address in my letter). Thought you guys might like to have this!

Evie has asked me to respond to your kind letter requesting more info regarding her music that is now available on CDs. She currently has 2 compilation CDs available from White Field Music. The first one is,

COME ON RING THOSE BELLS which has the familiar Christmas song she recorded in the mid 70s as its title song. There are many old tunes from her 2 previously recorded Christmas albums on this CD, as well as two brand new ones. The full list of song titles are as follows.
COME ON RING THOSE BELLS
O LITTLE TOWN OF BETHLEHEM
*ONE WINTER'S NIGHT
SILENT NIGHT
CHRISTMAS IS ESPECIALLY
*BETHLEHEM'S STAR
CHRISTMAS, A HAPPY TIME
hARK, THE HERALD ANGELS sING
A THOUSAND CANDLES
O COME, O COME EMMANUEL
AWAY IN A MANGER
A TINY LITTLE BABY
THE FIRST NOEL/JOY TO THE WORLD
O HOLY NIGHT
(Asterisk indicates a brand, new recording)

As far as other music, we have a compilation CD available entitled, GIVE THEM ALL TO JESUS.

It's 12 songs listed as follows:
GIVE THEM ALL TO JESUS
UNFAILING LOVE
MIRROR
*BRIDGE OF PRAYER
*I SHALL SEE YOU SOON AGAIN
SAY "I DO"
SPECIAL DELIVERY
HOLD ON
*OUR BROTHERS AND OUR SISTERS
PRAISE THE LORD, HE NEVER CHANGES
UNITED WE STAND
TOUCH YOUR PEOPLE ONCE AGAIN
(Asterisks indicate new releases)

The price for each CD is $10. Shipping and handling is an additional $5 per mailing. Please indicate if you would like Evie to sign it for you. Again-- thank you for your interest and the encouraging words for her and her family. As you may know, she and her husband Pelle are actively working with the missions project called Back to Jerusalem, that assists the underground Chinese housechurch movement with evangelization FROM China to the 10/40 Window. Feel free to check that website at www.backtojerusalem.com for more inspiration!

May the Lord richly bless you!

[NOTE: sorry it's all disjointed, that's how it copied and pasted from my email]

Cindy, I have been fond of listening to Evie's songs, chiefly those in the NEVER THE SAME album.
I have those songsin my PC but I have now problem of hearing; I'm almost deaf. I'd like someone pass me on the lyrics of the songs in that album, please.