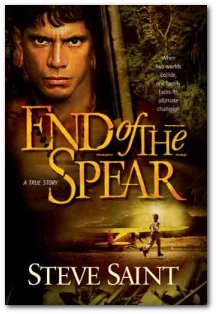 Various and sundry thoughts going through my brain today...

The End of the Spear

I've been wanting to read this book, written by Steve Saint, son of missionary pilot Nate Saint. Nate Saint was one of five missionaries killed by the Auca Indians in South America.

I've been enthralled with this story ever since I was part of a reader's theater in college called Bridge of Blood. I played Barbara Youderian, the wife of Roger Youderian, one of the slain missionaries.

Being a part of this performance affected me greatly. I ended up reading Through Gates of Splendor and Shadow of the Almighty, both written by Elisabeth Elliot, widow of missionary Jim Elliot.

SharperIron.com today features a review by Todd Wood of "The End of the Spear."

The book has been made into a movie that hits theaters January 20th. Here , here and here are some news stories about the film.

The incredible, unmitigated ignorance and utter hatefulness of this man and his followers absolutely blows my mind...and makes me frustrated and angry that he and I both call ourselves "Christians." The vitriol and ugliness spewed by the "God Hates Fags" crowd are about as unChristian and unBiblical and unlike Jesus that you could possibly get.

The Crusty Curmudgeon says it better than I could (while also taking Pat Robertson to task for this Ariel Sharon comments.) Love how the Curmudgeon refers to Phelps' congregation as Westboro "Baptist" "Church."

Believing that homosexuality is Biblically wrong is one thing. Making it a hate-filled obsession is taking it beyond the pale.

Good comments on "The Book of Daniel"...

I love getting comments on my blog, and I appreciated the views expressed on my post about "The Book of Daniel." What many of my commenters did that I didn't? They actually watched the show, and thus were much more qualified to pass any sort of judgement on it.

The consensus still overall seems to be an overwhelming thumbs down.
Posted by Cindy Swanson at 9:52 AM