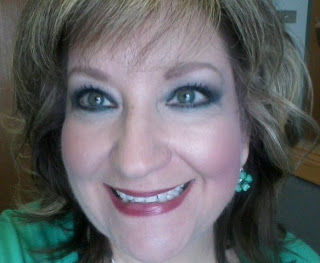 Did you know the fashion and make-up Powers That Be have declared emerald to be the color for 2013?

With yesterday being St. Patrick's Day, I decided to go all out...green everything, including my eye shadow.  Yes, the Make-up Powers That Be often tell you not to match-matchy your clothes and eye make-up, but I chose to ignore them.  Above is the finished look.  If you'd like to know how I accomplished it, read on! 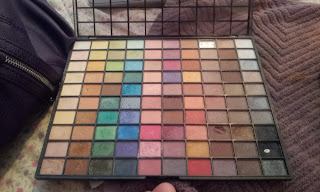 This ELF palette has been may go-to palette since I got it for FIVE DOLLARS--yes FIVE DOLLARS--half-price at Walgreen's right after Christmas.  For my festive emerald St. Paddy's look, I chose to build the look around the emerald shadow that's in the fourth row up from the bottom, three shadows over. 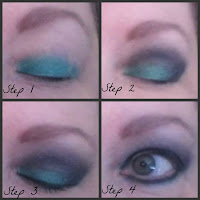 Prep for the look:

I started out with a clean, moisturized face.  Before beginning with the shadow, I shaped my eyebrows with a dark brown shadow and a tiny angled brush...used ELF eyelid primer all over the lid...and a neutral skin-toned shadow all over the lid, all the way up to the brow.

Why, you ask?  I know it seems like a lot of steps, but if you're like me and want your eye shadow to stay put all day, it's worth it.

Now for the color:

Step 1:  I applied my emerald shadow all over the eyelid itself.

Step  2:  This is one step in which I deviated from ELF.  I love the gray in my Lancome eye shadow palette so much, and that's what I used in the crease and as a contour on the edges of my lid.

Step 3:  I blended it out with a brush, and even used my finger a little.

Step 4:  I used Estee Lauder black eye pencil above and below my lashes.  (I don't put liner on my water line, because I think it makes my eyes look smaller.)

Step 5:  You can't see it very well in the pic, but I used eyelash primer on both sets of lashes.  I'm convinced it makes my lashes look a bit longer and thicker, (although naturally they're neither.)

Step 6:  In the center of my eyelid, I put a small smudge of a much-lighter green and blended slightly.  I think the little bit of bright in the center of the lid makes you look more wide-awake somehow.

Step 7:  I then put 2 or 3 coats of Estee Lauder black mascara on my upper and lower lashes.

Below:  I put a light shade of neutral with the tiniest bit of shimmer right below my brow.  You have to be careful with this, especially if you're older like me.  Too much shimmer, too much light stuff below the brow can end up looking tacky.  Use a very light touch. 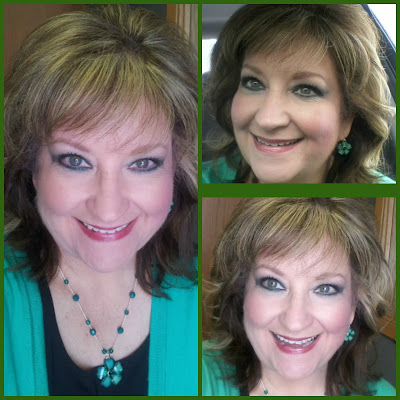 I'm linking up today with Visible Monday, hosted by Not Dead Yet Style!
Posted by Cindy Swanson at 2:46 PM

Your greens are gorgeous, Cindy! I love e.l.f. cosmetics too - I am always wearing something of theirs. Thanks for sharing your tutorial with Visible Monday : >

great tutorial I am going to try your method thanks

You certainly know how to do this, Cindy! Your eyes look gorgeous!

I did green eyeshadow as well (on Friday, with an all-green outfit for work)! You did a great job - that's a tricky colour!

Thank you so much for visiting my blog, Cindy!

I like your look. I just wonder if it would work with my brown hair. . .

I always admire women who can pull off the brighter shades... it takes some thought and some discernment, as you demonstrate. Thanks for your tutorial, and having the variety of shades at your fingertips has to help! Very good buy. Happy to meet you.

Hey Cindy! Lovely to meet you! I love the name of your blog, it;s very musical!
I must go and follow this tutorial because I am totally rubbish at eye-shadow! It looks gorgeous on you!!!x

I love inexpensive makeup! I can use the money I save to buy designer duds. Awesome tutorial! xoxo

I'm a fellow bookaholic -- looks like you got a few great finds!
Thanks so much for visiting and commenting on Saved by Grace!
Your blog is a blessing and I am now following it, and I invite you to follow Saved by Grace also:
http://savedbygracebiblestudy.blogspot.com/
Love in Him,
Laurie Collett

Wow! My only attempt at altering my make-up for St. Patti's was to sub my brown eyeliner for forest green. (Read browny-green.) You give me something to think about next time!