Rich Mullins and "The Color Green"

As a way of celebrating my Irish heritage and making St. Patrick's Day about so much more than partying and getting drunk, I've dedicated my Tumblr blog to Ireland (both the Republic of and Northern), all things Irish, and the color green, through March 17th.

I was mentioning this to my daughter and she said, "Rich Mullins had a song called 'The Color Green.'"

We looked it up on YouTube and were delighted to find that it was filmed in Ireland and has an unmistakable Irish flavor.


I posted it on my Tumblr blog and added this text...

"…I was thinking about this old man going to a meeting and realizing on his way that he’d already been in a meeting. It’s just he hadn’t been in a corporate meeting. He’d already been surrounded by the presence of God. And he looks out, and of course he’s a farmer, and has an appreciation for seasons - has an appreciation for that kind of thing. And all of a sudden he realizes that God invented green.--Rich Mullins
“ …certainly “The Color Green” was an Irish song and the Chieftains I know influenced that, and he played the hammered dulcimer I’ll bet like the Chieftains would if they’d ever seen a hammered dulcimer.—Rich’s friend Steve Stockman

Wonderful singer-songwriter Rich Mullins, “The Color Green,” filmed at and around the Cliffs of Moher in Ireland.
Rich was of Irish and French heritage.  I love the part in the video where he’s standing next to a sign that says, “Mullins.”
His  father was raised in Appalachia, and as a way of connecting with his dad’s heritage, Rich learned to play the hammered and lap dulcimers and the Irish tin whistle.
Rich died in a car wreck in 1997.  If you aren’t familiar with his incredible, poetic songs, I highly recommend them.


My friend reminisces about Rich Mullins

My friend Randy, who I worked with in Christian radio for many years, got to meet Rich several times.  I was the one who had to give him the bad news about Rich's death, and he was devastated.  Randy wrote in his blog  about one of his encounters with Rich:

I remember about seventeen years ago I had Rich Mullins in the studio and he had his hammer dulcimer with him. He played for us live. I was amazed. I told him what a gift he had. He taught me a valuable lesson that day. He said, "Randy, don't underestimate your gift. There's no way I could get behind that control console and flip all those switches, look at the clock for timing and all the other things that people don't see." That always stuck with me. We all indeed are gifted in different areas.

"...You see, I knew Rich at least well enough to know the wonder he saw in this world and his total abandonment to the call of Christ. He was a lover of God!


A cool reaction to the video...

Ben Whitmire, who posted this video on YouTube added this:


I used this song in a presentation in my Humanities class around 2004, and the general reaction from the class was a collective "wow," "whoa," and stunned silence -- Which is the reaction I expected.

This is a pretty heavy song and video to digest the first time around, and in a class that was mostly full of non-Believers, the stunned silence gave me an unusual sense of satisfaction :) 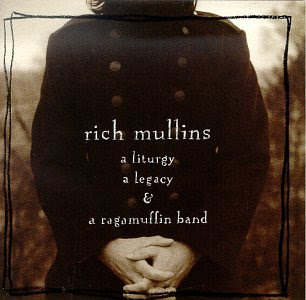 May I copy and repost to my blog giving you credit, ma'am?