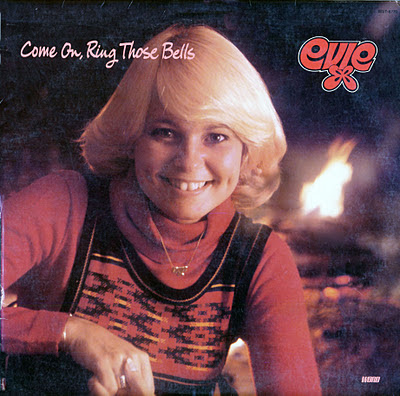 About this time of year, my blog stats start to explode with people looking for information on Evie Tornquist Karlsson's beloved Christmas music, particularly the song "Come On, Ring Those Bells."

As a radio personality, I was able to interview Evie at least twice. The most recent interview, a few years ago, was available to listen to on a ftp site that, unfortunately, no longer exists.

The earliest interview was in 2004, and I think it's worth revisiting because even the transcript manages to capture the delightful personality of this very talented and beloved artist. Here it is:

CINDY: A couple of years ago, I mentioned a certain singer in an article I wrote on my website about my favorite Christmas music. Amazingly, I found that many of the hits on my website were consistently from people looking for information about that singer. That singer is Evie Tornquist Karlsson, and I'm so delighted to have you as my guest today.

EVIE: (laughing) Thank you so much, Cindy, and we're still ringing those bells after all these years!

CINDY: Well, you know, it's almost surreal actually talking to you, because I can remember that when I was student at Baptist Bible College in Springfield, Missouri, way back in the 1970's, I almost wore out your "Mirror" album.


I loved every song on that album, I just about memorized the whole thing. Also, half the guys at my college were in love with you, so I was even a little jealous of you, and can't believe I'm actually talking to Evie!...

You know, I want to recap your career and of course update people on what you're doing now, but first I need to ask you about something that apparently is still huge...and that is the Christmas song, "Come On, Ring Those Bells."

Most of the hits that I get on my website that are looking for info on you specifically often contain the phrase "Come On, Ring Those Bells"--people wanting to get the lyrics, the guitar tabs, find out where they can get the sheet music, whatever.

Tell me, first of all, how you came to record that song?

EVIE: Well, it was back in the mid-70's, when the folks at Word Records were helping me put together the very first Christmas album that we did.

We did two with them, and this was the first one...and just like in every other situation, the A and R people,whose specific job it is find music that sort of makes sense for the different artists to do, they bring just a big briefcase over with demos and chord charts and we just take several days and look over them.

And I knew I wanted to do some of the older traditional songs like "O Holy Night" and "Silent Night" and "O Little Town of Bethlehem," and such, but we also needed some fresh new things. And so, which was sort of uncharacteristic for record companies back then,they pitched a song called "Come On, Ring Those Bells" to me which was not part of their roster.

They went to Manna Music, which was another Christian publishing company, and got this song "Come On, Ring Those Bells," written by Andrew Culverwell, and played it for me, and said, "What do you think?" And I immediately loved the song. I thought it had such a great combination of zeroing in first of all on what the season truly is all about, and that is it's Jesus birthday, it's our time to celebrate Him, and keep the focus on Him.

But it also had a very folksy way of applying this to all of us, y'know: (singing)

All of us could listen to that and say, "Oh, yeah...that's absolutely right. And let's, come on, let's ring the bells of Christmas, and remember that Jesus, we remember this is YOUR birthday." And it just had a wonderful arrangement...and I think it was just something that obviously the Lord wanted to have that be embraced the way it was. It was His plan from the get-go, we just got to be part of it and watch it happen.

The background vocals are done by a lady who is a very well-known country artist herself in her own right, by the name of Janie Fricke.

EVIE: Janie Fricke is the gal who got two other young women together and did the background vocals for that entire Christmas album. But the "Come On Ring those bells" tune is where you can really hear her beautiful voice.

CINDY: Now that is a little bit of trivia that I had never heard before, Evie. Now, why do you think that it has so endured, obviously stood the test of time?

EVIE: Oh, I haven't a clue, Cindy, other than...I don't know, perhaps at that very moment in the mid-70's, contemporary Christian music was in its early stages. There were many of us that were trying to sort of push the envelope a little bit, within reason, not get people upset with us...but sort of bring Christian music to a kind of grassroots, folksy, embraceable way. Because, the purpose here for what we do what we do, and I'm sure it's the same with you, Cindy...is we want to introduce people to the Lord Jesus Christ.

EVIE: And whether it takes a website or a blog or a radio program or a song or a book or words over the fence with our neighbors, that's the whole purpose of why we're here.

So, to do music then, that would be easily embraced by those who perhaps aren't in church on a regular basis....perhaps those who would rather hear an album with Janie Fricke than a Christian singer. I suppose, maybe at that very moment there was sort of an open ear for it, and then as in most cases with holiday music and holiday traditions, something occurs within our hearts. It brings back warm, wonderful memories...And you know how they say the smell or the scent is a very strong memory with us--well, I think Christmas memories are also a tremendous trigger.

CINDY: That is very true. And I also think this song really lends itself well to being sung by children's choirs and children's groups...

CINDY: There's nothing that sounds as cute as a bunch of little voices singing this song, and I've heard it many times. But the question, Evie, that I've got to ask you is, can people still ahold of the Christmas album that it's on, or can they get ahold of the sheet music or the lyrics...is that available out there?

EVIE: Well, I have to be perfectly honest and say that I really don't know the best answer to that question. We did, or rather Word did a "Christmas Memories" CD about four or five years ago, and included a few new songs as well as "Come On, Ring Those Bells." But to my understanding, that is now out of print.

CINDY: Well let me put my vote in right now, and I'm sure a lot of people will agree with me, for you to make another Christmas album, Evie. I think it's time.

Posted by Cindy Swanson at 7:03 AM

Cindy, this was so much fun..I enjoyed the interview and the music! Thanks for repeating for those of us who missed the first round!

Wow...this is a trip back in time. I remember listening to Evie as a little girl, and we even went to one of her concerts. Thank you for helping me dig up that memory!